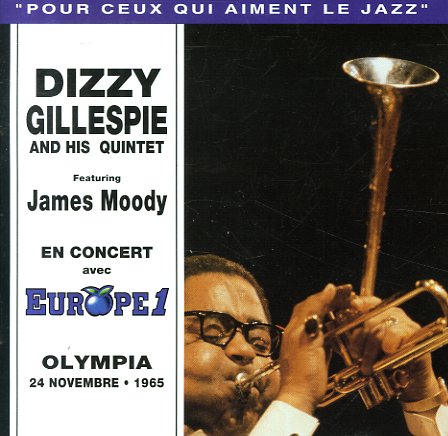 Outstanding Dizzy Gillespie material – from one of his most overlooked periods! The time is the mid 60s, and after a few years of working with Lalo Schifrin in his group, Dizzy's changed his Latin bag from hard-edged Cubop to mellower more complicated Bossa and modal jazz. The result is some of the most sophisticated playing in Dizzy's career – hitched to a groove that's still filled with soul and fire, and which rolls on in a compelling way that always hooks us hard! The group features Kenny Barron on piano, and reed work by James Moody, one of the other great secrets of the mid 60s! Tracks are all long – and titles include "One Note Samba", "Con Alma", "Umh, Umh", and "Chega De Saudade".  © 1996-2022, Dusty Groove, Inc.
(Out of print and still sealed.)

Art Blakey & The Jazz Messengers En Concert
Europe 1, 1961. Used 2 CDs
CD...$8.99
Excellent lost live work by Art Blakey – playing here with one of the best-ever versions of the Jazz Messengers! The frontline is held down by Wayne Shorter, Bobby Timmons, and Lee Morgan – the firey trio who put Blakey's group on the map as one of the best-ever hardbop ensembles of ... CD