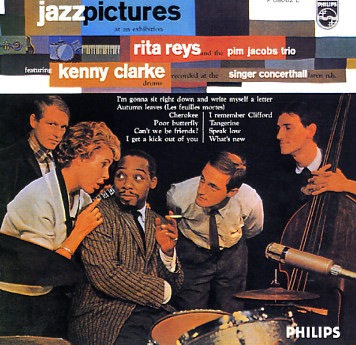 Jazz Pictures At An Exhibition

An excellent live set from Dutch vocalist Rita Reys – one of the coolest voices on the continent during the postwar years, and equally well-skilled at singing in English as her American contemporaries! The backing on the set is by the Pim Jacobs trio, with a guest appearance by Kenny Clarke on drums – and the titles are a strong mix of jazz numbers and standards – all done with a lightly dancing quality that's really great. Reys was easily one of the best European singers to pick up on American jazz modes at the time – and this album's a perfect example of the strength of her talents! Titles include "Speak Low", "What's New", "I Remember Clifford", "Poor Butterfly", "Autumn Leaves", and "I Get A Kick Out Of You".  © 1996-2023, Dusty Groove, Inc.
(Excellent Japanese pressing, with insert – SFX 10516)

Encounter – The Swingle Singers With The Modern Jazz Quartet (aka Place Vendome)
Philips, 1966. Very Good+
LP...$3.99 5.99
An excellent set that has the vocal talents of the Swingle Singers backed by the sweet and mellow instrumentation of the Modern Jazz Quartet! Given that John Lewis & Co were essentially local residents in Paris for so many years, it's amazing it took them until 1966 to hook up with Ward ... LP, Vinyl record album

Cool Voice Of Rita Reys (Philips)
Philips, 1956. Near Mint-
LP...$11.99 26.99
In the immediate post-war years, the Dutch jazz scene was one of the first to emerge with a sophisticated understanding of the American jazz form. Rita Reys was one of the country's leading talents in this respect, and she had a wonderfully cool vocal style that was similar to American singers ... LP, Vinyl record album