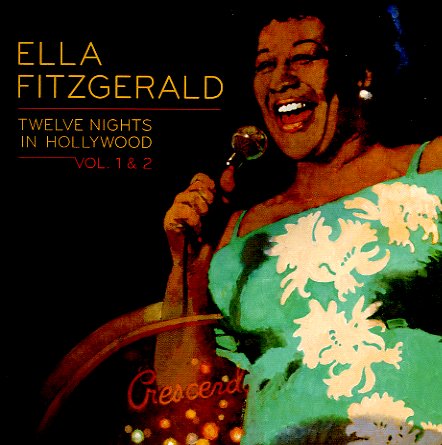 Massive music from Ella Fitzgerald – 2CDs worth of sublime small group recordings – all of them live, and all of them previously unissued before the Hip-O/Verve Select box set! The set follows the same format of the Verve Ella In Hollywood album – recorded in a small club setting, with combo backing that really lets Fitzgerald open up and swing – inflecting the tunes with the kind of warmth and spontaneity that she brought to her famous live performances of the time – which were almost always more compelling than her studio sides, no matter how great those were too! Vols 1 & 2s feature material from two weeks' worth of recording in May of 1961 – with backing from Jim Hall on guitar, Lou Levy on piano, Wilfred Middlebrooks on bass, and Gus Johnson on drums. A brief intro rolls into beautiful material on 2CDs – 37 tracks in all: "Lover Come Back To Me", "Too Close For Comfort", "Little White Lies", "I Found A New Baby", "Perdido", "'Round Midnight", "Take The 'A' Train", "Mr Paganini", "Nice Work If You Can Get It", "I Can't Get It Started", "Give Me The Simple Life", "Lorelei", "Witchcraft", "That Old Black Magic", "Lullaby Of Birdland", "Imagination", "Joe Williams' Blues" and more.  © 1996-2022, Dusty Groove, Inc.
(Out of print.)

Ella At The Opera House
Verve, 1957. Used
CD...$3.99
Nice backing on most tracks by a small combo that features Oscar Peterson on piano and Herb Ellis on guitar – and a larger group on a few more, with Stan Getz, Coleman Hawkins, and Lester Young on tenors! Titles include "Stompin At The Savoy", "Goody Goody", "Ill ... CD