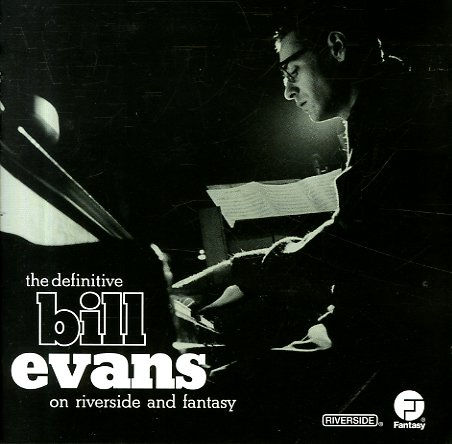 Quintessence
Fantasy/OJC/ZYX (Germany), 1977. Used
CD...$6.99 (CD...$6.99)
70s work from Evans, caught not in his typical solo or trio setting, but in an all star quintet that recalls his excellent Interplay sides. Evans is joined by Harold Land, Kenny Burrell, Ray Brown and Philly Joe Jones who offset Evans' contemplative approach beautifully here. 5 numbers in all, ... CD

Some Other Time – The Lost Session From The Black Forest
Resonance, 1968. Used 2 CDs
CD...$14.99
Never-heard studio work from the great Bill Evans – not another one of those many (and great) live performances from overseas – but a well-conceived, beautifully recorded set of tracks that were done for MPS Records in their famous studios in the Black Forest! The group here is Evans ... CD

Quintessence
Fantasy, 1977. Used
CD...$6.99 (CD...$6.99)
70s work from Evans, caught not in his typical solo or trio setting, but in an all star quintet that recalls his excellent Interplay sides. Evans is joined by Harold Land, Kenny Burrell, Ray Brown and Philly Joe Jones who offset Evans' contemplative approach beautifully here. 5 numbers in all, ... CD

New Jazz Conceptions
Riverside/OJC, 1956. Used
CD...$6.99
Bill Evans' first album as a leader – and a well-titled set that went onto transform the sound of the piano in jazz! The session isn't as lyrically free as some of Evans' later classics, but already has an undeniably fresh approach to the keys – one that's modern, yet never academic ... CD

You Must Believe In Spring
Warner, 1977. Used
CD...$4.99
Wonderful late work by Evans – recorded in 1977, but not issued until after his death in 1980. The session benefits from the bass work of Eddie Gomez – rich, round, and warm – a perfect accompaniment for Evans' sometimes faltering piano work at the time – and a player that ... CD