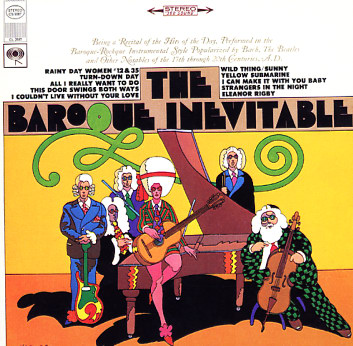 One of our favorite entries into the strange 60s genre of baroque pop – arranged and produced with very hip touches from the great John Simon! Many of the numbers here are familiar 60s pop tunes – but they're redone in an instrumental way using electric harpsichord, woodwinds, and some very unusual arrangements – but all in styles that still keep things plenty darn groovy! There's less of the "too complicated" modes of some other 60s baroque pop attempts – and Simon remembers to focus on the hooks and grooves that made these numbers so great in the first place – often still keeping in some snapping bass and drum bits at the bottom to push the rhythmic agenda of the originals! Tracks include "Turn Down Day", "All I Really Want To Do", "I Couldn't Live Without Your Love", "Rainy Day Women #12 & 35", "Yellow Submarine", "Sunny", "Wild Thing", and "Strangers In The Night".  © 1996-2020, Dusty Groove, Inc.
(Mono 360 Sound pressing. Cover has a Demonstration stamp and small date in pen on back.)