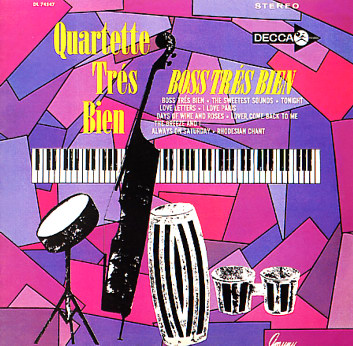 A landmark blend of soul jazz and bossa nova – cut by the legendary Quartette Tres Bien back in the 60s! The group are kind of a "piano trio plus" – an outfit with piano, bass, and drums in the lead – but also plenty of conga and added percussion – a style used here to really underscore the bossa inspiration of the set – often in ways that are more driving and more complicated than original 60s bossa recordings themselves! The feel is really unique – almost equally inspired by African rhythms in parts – and even when the group are playing familiar numbers, then manage to transform the tracks completely with their inventive approach to rhythms and super-searing work on piano! Titles include the jazz dance classic "Boss Tres Bien", plus "Rhodesian Chant", "Always on Saturday", "The Sweetest Sounds", "I Love Paris", "Lover Come Back To Me", and "Days Of Wine & Roses".  © 1996-2020, Dusty Groove, Inc.
(Black label stereo pressing. Cover has light wear and aging and a small cutout hole.)