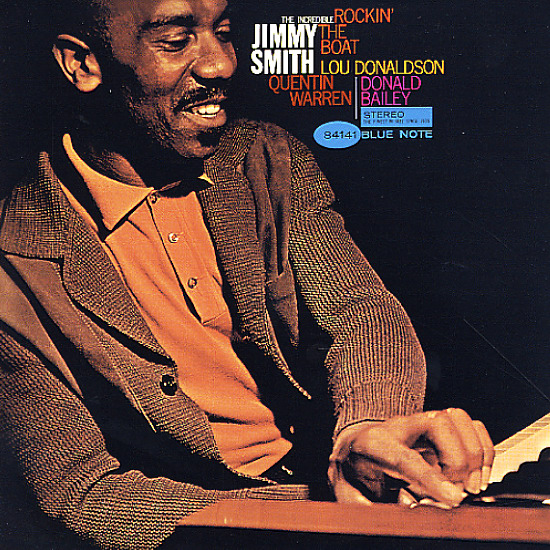 A nice little set from Jimmy Smith – often overlooked amidst the flurry of early 60s Blue Notes, but a really strong session! The group on the set is Jimmy's trio with Quentin Warren on guitar and Don Bailey on drums – but they're augmented here by Lou Donaldson, whose crafty work on alto really opens the set up. Tracks are shortish and mostly familiar, but done with a laidback and easy groove that brings out the best in Jimmy's late Blue Note Hammond stylings. Titles include "Matilda Matilda", "Pork Chop", "Can Heat", and "Trust In Me".  © 1996-2022, Dusty Groove, Inc.
(New York mono pressing, with Van Gelder stamp and ear. Includes the Blue Note inner sleeve. Cover has light wear and a name in pen on the back.)

Jimmy Smith Plays The Standards
Blue Note/Sunset, Late 50s. Very Good
LP...$2.99
Early Jimmy Smith work for Blue Note – packaged together here as a "standards" collection and issued on Liberty's Sunset label in the late 60s! The collection offers little in the way of session details – clearly an attempt to pass it off as new material – but it does ... LP, Vinyl record album

Paid In Full
Mojo, 1974. Very Good+
LP...$29.99
Lost funky work from Jimmy Smith – issued on his own small Mojo Records label, which he formed after leaving Verve in the early 70s. The album features 4 long tracks – played by by Jimmy in a hip small combo with Larry Gales on bass, Ray Crawford on guitar, Donald Dean on drums, and ... LP, Vinyl record album

Bashin' – The Unpredictable Jimmy Smith
Verve, 1962. Good
LP...$1.99
One of Jimmy Smith's biggest albums of the 60s – and a classic Verve pairing of his lean Hammond organ solos with the fuller, hard-swinging arrangements of Oliver Nelson! Nelson is working here at the height of his powers – backing Smith with a large group, but in a way that only seems ... LP, Vinyl record album

Who's Afraid Of Virginia Woolf?
Verve, 1964. Very Good Gatefold
LP...$8.99
A real treasure, and a record that may well be our favorite Jimmy Smith album for Verve – a masterful meeting of his smoking Hammond work with some swingingly sophisticated arrangements by Oliver Nelson and Claus Ogerman! Both Nelson and Ogerman bring a fuller spectrum of horn work to the ... LP, Vinyl record album