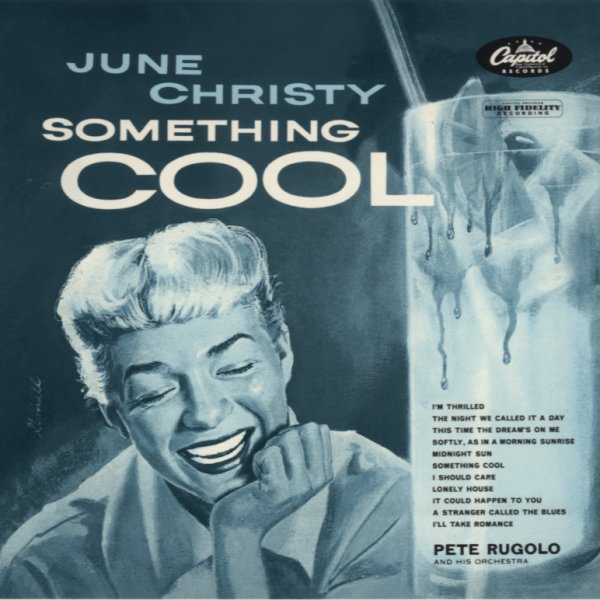 From its booze-soaked title cut, to its haunting selection of lonely ballads like "Midnight Sun" and "Stranger Called The Blues", this is one of the most fantastic vocal jazz albums of all time – and a record that we'd recommend instantly to anyone! June Christy has an incredibly icy tone on the record, filled with sorrow, regret, and loneliness – all of which are amplified even more deeply by Pete Rugolo's eerie, off-kilter arrangements. Titles include "Something Cool", "It Could Happen To You", "Lonely House", "I'm Thrilled", and "The Night We Called It A Day". Plus, this special CD reissue features the mono and stereo recordings of the album – completely different ones, as the album was originally recorded in mono in 1954, and completely re-recorded again with the same arrangements in 1960!  © 1996-2022, Dusty Groove, Inc.

Tampico
Collectors Choice, Mid 40s. Used
CD...$4.99
Rare early recordings from the great June Christy – mostly from radio sources, at a time when she was backed by the Stan Kenton orchestra! Even at this early point, the Christy/Kenton combination is amazing – fresh and modern, and light years ahead of the style of other swing-era ... CD

Great Ladies Of Song – Spotlight On June Christy
Capitol, Late 50s/Early 60s. Used
CD...$2.99
A great little collection of work by the legendary June Christy – one of our favorite vocalists ever, served up here in a host of her best songs for Capitol! The package is way more than just a "best of" – because the compilers took their "spotlight on" title ... CD

Song Is June!/Off Beat
Capitol, 1958/1960. Used
CD...$9.99
A loving reissue that brings together two of the best June Christy albums on one CD! Both albums were cut a bit later than some of Christy's more famous work, and they represent the peak of her emotional maturity as a singer. The arrangements on both albums were done by Pete Rugolo, and he ... CD

Misty Miss Christy (with bonus tracks)
Capitol, Mid 50s. Used
CD...$4.99
One of June's all-time classics – and perhaps her most famous album, next to the sublime Something Cool. The set, like that one, was arranged and conducted by Pete Rugolo – whose icy and modern touches are the perfect foil for June's sad and dark voice. Familiar tunes are completely ... CD

Something Cool (with bonus tracks)
Capitol, 1953. Used
CD...$4.99
From its booze-soaked title cut, to its haunting selection of lonely ballads like "Midnight Sun" and "Stranger Called The Blues", this is one of the most fantastic vocal jazz albums of all time – and a record that we'd recommend instantly to anyone! June Christy has an ... CD

But Beautiful
Capitol, 1969. Used
CD...$24.99
One of the greatest Nancy Wilson albums of the 60s – a small combo jazz date, done with a style that's different than some of Wilson's larger sessions of the time! The group has a relaxed, easygoing feel – and Wilson slides in with a style that's a lot more laidback and subtle than on ... CD

Nancy Wilson/Cannonball Adderley
Capitol, Mid 60s. Used
CD...$3.99
The sweet vocals of Nancy join the classic Cannonball quintet for a great set of soul jazz tunes that was one of Capitol's biggest selling jazz sides in the 60s! About half the cuts feature Nancy on vocals – on tunes like "Save Your Love For Me", "Never Will I Marry", ... CD

Trav'lin Light
Capitol, Late 40s. Used
CD...$4.99
Amidst the clutter of pop-oriented Peggy Lee reissues on the market, it's often difficult to find a CD that shows how strong a jazz singer she was back in the day. This set nicely corrects that problem by offering up 15 great little jazzy gems by Peggy – all originally recorded for Capitol's ... CD

Nancy Wilson Show
Capitol, 1964. Used
CD...$8.99
Early proof that Nancy Wilson was definitely on the right track with her career – a tremendous little live date recorded without any of the schmaltz or overdone showmanship of her contemporaries! Although the setting is the Cocoanut Grove, Nancy often makes us feel like she's putting over ... CD