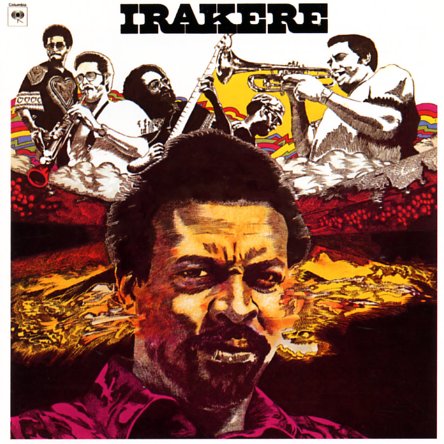 A landmark album from this powerhouse Cuban group of the 70s – their first record issued formally to an American market, and quite possibly their greatest effort of the decade! The sound here is a lot more focused than on the group's Cuban sessions from previous years – not commercial or slick, but free from some of the jarring shifts in styles that occurred before – and more in that sweet combination of rootsy percussion and Latin funk that made them great at their best previous moments! All players are great – and the lineup is almost a who's who of Cuban jazz at the time – with Chucho Valdes on piano and keyboards, Paquito D'Rivera on alto sax, and Arturo Sandoval on trumpet – plus guitar from Carlos Emilio Morales, percussion from Oscar Valdes, and tenor from Carlos Averhoff. The tracks were recorded live at the Montreux jazz festival – and titles include "Adagio", "Ilya", "Juana Mil Ciento", and the long "Misa Negra (The Black Mass)".  © 1996-2022, Dusty Groove, Inc.
(Cover has small initials in pen at the top right corner and is lightly bent at the back panel.)

Mr Watermelon Man – La Bamba
Columbia, Late 60s. Very Good+
LP...$13.99
Mongo Santamaria at the height of his Latin Soul years – working on a cool Columbia session titled after an earlier hit, but served up with his new lean sound of the late 60s! The album's got that perfect Santamaria combo from the time – a group that features trumpet and these ... LP, Vinyl record album

Soul Bag
Columbia, Late 60s. Very Good+
LP...$14.99
A stone 60s smoker from Mongo Santmaria – and a great little set that really lives up to its title! The "soul" reference points to the record's host of 60s soul tunes, which are given a hip Latin spin by Mongo – working here with killer boogaloo arrangements from the great ... LP, Vinyl record album

Oliver! Ole!
Columbia, Late 60s. Very Good
LP...$2.99
Insanely wonderful Latin soul album recorded by Frank Owens that has the surprising (and goofy) bonus of being a Latiny rendition of the hit musical Oliver! Don't be put off by that cockney musical aspect of the source material, though – because the sound here is great New York Latin Soul, ... LP, Vinyl record album