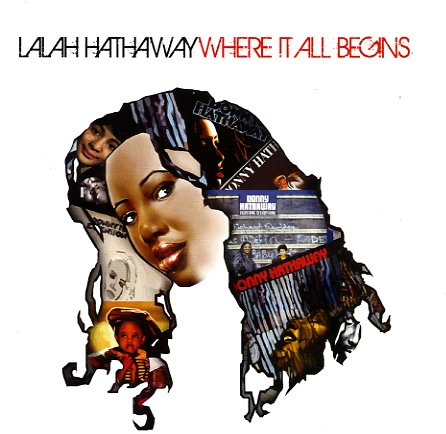 Where It All Begins (with bonus tracks)

A really strong album from Lalah Hathaway – profoundly addressing her legacy on this second album for Stax by covering a Donny Hathaway classic and paying tribute to him with the album art – all the while standing up proudly as a soul music veteran with a proud legacy that's all her own! If you thought Lalah was going to go old school style on Where It All Begins – rest assured that this is contemporary soul music – though crafted with a timeless sensibility. There's some nicely thumping numbers and sweeter, more soaring jams – with Lalah's smoky voice carrying it all the way. Lalah's move to Stax continues to be a major creative win! Includes "Strong Woman", "Where It All Began", "My Everything", "Small Of My Back", "Always Love You", "This Could Be Love", Wrong Way", "I'm Coming Back" feat Rochelle Ferrell, "Dreamland", and a fresh take on the Donny Hathaway classic "You Were Meant For Me". Includes two bonus tracks.  © 1996-2020, Dusty Groove, Inc.
(Still sealed.)

Ultimate Isaac Hayes – Can You Dig It (2CD + DVD box set)
Stax, Late 60s/1970s. Used 2CDs & DVD
CD...$9.99
Great work by Isaac Hayes – featuring a wealth of classic tunes from his years at Stax, packaged with some bonus video material from the 70s! The music alone is more than worth the price of the set – as the collection includes big hits, choice album tracks, and even 3 never-issued ... CD

Back To Back
Stax/Atlantic, 1967. Used
CD...$4.99
Two great Memphis instrumental groups, back to back on one CD – in a smoking little live set that keeps the Stax Records sound strong – even away from the studio! The set's actually heavier on work by Booker T & The MGs than it is cuts by The Mar-Keys – as Book and crew ... CD

King & Queen
Stax/Atlantic, 1967. Used
CD...$6.99
A legendary collaboration between Otis Redding and Carla Thomas – the former of whom was definitely the king of the Memphis soul scene at the time of the record's release, and the latter of whom was certainly going for the title of queen with her power on the record! Carla here is a lot more ... CD