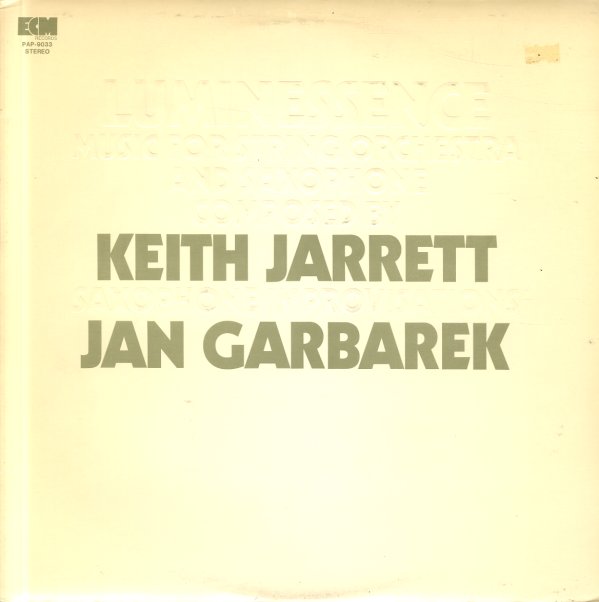 One of Keith Jarrett's compelling large ensemble works – performed with a string orchestra, and solo tenor and soprano sax from Jan Garbarek!  © 1996-2022, Dusty Groove, Inc.
(US pressing in the embossed cover.)

Untitled
ECM, 1976. Near Mint-
LP...$18.99
One of the excellent DeJohnette albums cut for ECM in the mid 70s. He's playing here with John Abercrombie, Alex Foster, Mike Richmond and Warren Bernhardt in an electric setting, and the vibe has the sort of wide open feel that a lot of progressive players were exploring at the time: a sort of ... LP, Vinyl record album

Bass Desires
ECM, 1986. Near Mint-
LP...$24.99
One of the leading lights of the ECM Records scene in the early 80s – bassist Marc Johnson, working here with his successful Bass Desires group! The lineup features some wonderful interplay on stringed instruments – Johnson's bass, and guitars from both John Scofield and Bill Frisell, ... LP, Vinyl record album

Dreams So Real
ECM, 1976. Sealed
LP...$23.99
Gary Burton takes on the music of Carla Bley – in a wonderfully sensitive set that opens up rich new colors in her music! The group here is a particularly well-chosen one for the effort – a quintet with Burton on vibes, Mick Goodrick on guitar, Steve Swallow on bass, and Bob Moses on ... LP, Vinyl record album

Northern Song
ECM, 1982. Near Mint-
LP...$29.99
Steve Tibbetts is always a player who can effortlessly make soundscapes flow from his guitar – and here, he works with just the right of slight augmentation to his core acoustic work – using some added kalimba and tape loops – just a bit – and partnering up with the gentle ... LP, Vinyl record album

Ritual
ECM, 1977. Near Mint-
LP...$8.99
The best Keith Jarrett spirit of the 70s – those long, exploratory lines he virtually invented on solo piano – performed here by pianist Dennis Russell Davies! The set's one of the warmest we've ever heard from Davies – as he spins out on two side-long interpretations of this ... LP, Vinyl record album

Chet Baker In Milan
Jazzland, 1959. Near Mint-
LP...$34.99
A rare Italian album from Chet Baker – wonderfully cooking small group work that's a far bit greater than his more familiar "with strings" session recorded in Italy during the same period! The album's got Chet working with an array of great players from the local scene – ... LP, Vinyl record album

Thelonious In Action
Riverside, 1958. Near Mint-
LP...$29.99
A classic cooker from Thelonious Monk – recorded during his legendary run at the Five Spot in the late 50s, and featuring some especially great work on tenor from a young Johnny Griffin! Griffin's filling a role here that would be cemented a bit more firmly in the 60s by Charlie Rouse – ... LP, Vinyl record album