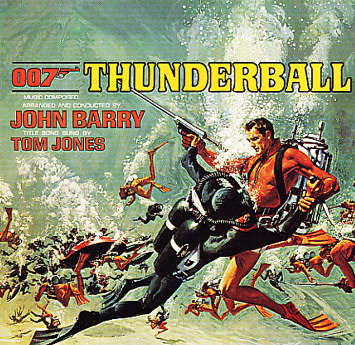 One of the greatest of Barry's scores for the James Bond films – early enough to be raw, but confident enough to change up the mood nicely! The theme song features vocals by Tom Jones – and the rest of the tunes almost reads as a who's who of hipster influences, as so many of them have been taken up by other artists as band or album names. Titles include "Mr Kiss Kiss Bang Bang", "Thunderball", "The Bomb", "Chateau Flight", "Bond Below Disco Volante", "Death Of Fiona", and "Switching The Body".  © 1996-2021, Dusty Groove, Inc.
(Mono pressing. Cover has aging on the back, but looks nice overall.)

Two For The See Saw
United Artists, 1962. Near Mint-
LP...$5.99
A gently jazzy score by Andre Previn – written for this Robert Wise film that starred an aging Robert Mitchum and a young Shirley MacLaine! The feel here is often sad, and a bit dreamy – scored with that "serious" early 60s style that showed up in New York TV dramas a fair ... LP, Vinyl record album

Fistful Of Dollars
RCA, 1967. Very Good+
LP...$29.99
A landmark record – not only in the history of the western, but in that of Ennio Morricone! The soundtrack, written for this hit Clint Eastwood spaghetti western, is everything you'd want in a 60s western – driving orchestral passages, twanging guitar parts, and spooky little bits that ... LP, Vinyl record album

Sharky's Machine
Warner, 1981. Near Mint- Gatefold
LP...$14.99
One of the coolest soundtracks ever for a Burt Reynolds film – an a hip mix of soul and jazz tracks that's gone onto become a classic over the years! The album's a compilation of sorts, but most of the material was recorded fresh for the film – and the different artists really work ... LP, Vinyl record album

Easy Rider
ABC/Dunhill, 1969. Very Good+
LP...$11.99
A tripped-out batch of freedom rock tunes – pulled together to accompany Peter Fonda and Dennis Hopper's famous trip across the wasteland of late 60s America! The set includes Steppenwolf's anthemic "Born To Be Wild", as well as their "The Pusher" – plus "Kyrie ... LP, Vinyl record album