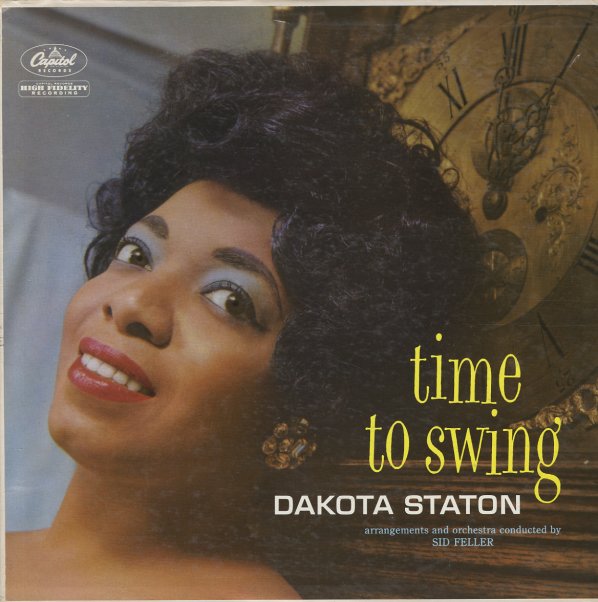 It's time to swing, but with a classy sound throughout – very much the best mix of modes Dakota Staton brought to her key early years at Capitol Records! Backings are by Sid Feller, and are pretty darn jazzy throughout – more so than some of Sid's other work of the time – a perfectly soulful setting for Staton's amazing vocals – very poised at points, yet never as stiff or stodgy as some of her contemporaries. Dakota's got a deep-toned approach to these tracks that really helps make the album way more than just another recording of familiar standards – and instead, does a great job of taking tunes into rich new territory. There's loads of great reedwork – from Phil Woods, Jerome Richardson, and Budd Johnson – and titles include "If I Should Lose You", "When Lights Are Low", "Willow Weep For Me", "But Not For Me", "The Song Is You", and "Until The Real Thing Comes Along".  © 1996-2022, Dusty Groove, Inc.
(Rainbow label stereo pressing. Cover has some wear and aging, bumped corner, and some small stains in back.)

Dakota Staton Sings Ballads & The Blues
Capitol, Late 50s. Near Mint-
LP...$6.99
A lesser-remembered Capitol set from Dakota Staton, but a great one too – a record that has Dakota singing ballads and blues, both of which she does pretty darn well! On some tracks, Sid Feller handles the backings, often with a gentle mix of strings – while other numbers have a bit ... LP, Vinyl record album

Late Late Show
Capitol, Late 50s. Sealed
LP...$6.99
A Capitol classic from Dakota Staton – and the record that made her a real leading lady at the label in the years before Nancy Wilson's rise! The set's got a wonderfully laidback feel that's in keeping with the title, yet it also swings nicely too – kind of a new level of soul in jazz ... LP, Vinyl record album

Broadway My Way
Capitol, 1963. Near Mint-
LP...$2.99
A great counterpart to Nancy Wilson's classic Hollywood My Way album for Capitol – and like that one, a classy set of tunes arranged and conducted by Jimmy Jones! The style is similar to Nancy's more pop-oriented work, with perhaps a bit more pause on the ballads to unlock their more ... LP, Vinyl record album