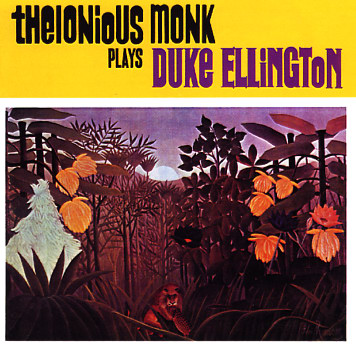 Thelonious Monk plays the music of Duke Ellington – but as you can imagine, the sound here is quite different than usual! At a time when Ellington was working mostly in large group format for the mainstream, Monk's presentation of his standards in trio format is a wonderful way to unlock their nascent modernism – the angular tones, lines, and complex ideas that were still present in the orchestra readings of the tunes, but which would show up even more strongly in Duke's smaller group dates of the 60s. Many numbers bear the familiar Monk imprint – complicated lines on the keys and sharp changes that really reignite the numbers – and rhythm here is from Oscar Pettiford on bass and Kenny Clarke on drums. Titles include "Mood Indigo", "It Don't Mean A Thing", "I Got It Bad and That Ain't Good", and "Caravan".  © 1996-2022, Dusty Groove, Inc.
(Original 2007 Keepnews pressing.)

Thelonious In Action (with bonus tracks)
Riverside/OJC, 1958. Used
CD...$6.99
A classic cooker from Thelonious Monk – recorded during his legendary run at the Five Spot in the late 50s, and featuring some especially great work on tenor from a young Johnny Griffin! Griffin's filling a role here that would be cemented a bit more firmly in the 60s by Charlie Rouse – ... CD

It's Monk Time (with bonus tracks)
Columbia, 1967. Used
CD...$6.99 (LP...$18.99, CD...$5.99)
One of our favorite Thelonious Monk albums ever – a bare bones, no nonsense session that's filled with great work from tenorist Charlie Rouse! The record's filled with everything that's great about the Monk/Rouse team in these years – an incredible interplay between sax and piano, ... CD

Live In Paris Vol 1
Explore, 1964. Used
CD...$9.99
A crystal-clear live recording by Thelonious Monk – captured in Paris during the height of his best years on Columbia Records! The group here is Monk's key 60s quartet – with Charlie Rouse on tenor, Ben Riley on drums, and Butch Warren on bass – all players who are more than ... CD

Everybody Digs Bill Evans (with bonus track)
Riverside/OJC, 1958. Used
CD...$2.99 (LP...$23.99)
Everybody Digs Bill Evans – or at least it certainly seems that way from the cover endorsements by Miles Davis, Cannonball Adderley, and Ahmad Jamal – but the real proof is in the record, and the set is a great one from Bill's classic years on Riverside! Evans is at the peak of his ... CD