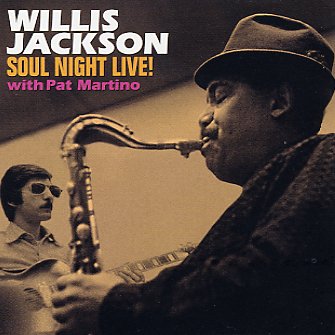 Classic work by 60s tenor giant Willis Jackson – a fantastic live session done in 1964 in New York, one that was originally spread out over the course of 2 LPs – Soul Night Live and Tell It. The material is finally brought together as one release here, a monstrously great set of 14 tracks that feature Jackson's gutsy tenor hard-grooving with a combo that includes Frank Robinson on trumpet, Pat Martino on guitar, and Carl Wilson on organ. The team of Martino and Wilson is especially great – choppy, groovy, and very soulful – with a sound that's similar to the organ work on classic albums by Jack McDuff from the same time. Titles include "Thunderbird", "All Soul", "Ebb Tide", "Up A Lazy River", "The Man I Love", and "One Mint Julep".  © 1996-2021, Dusty Groove, Inc.