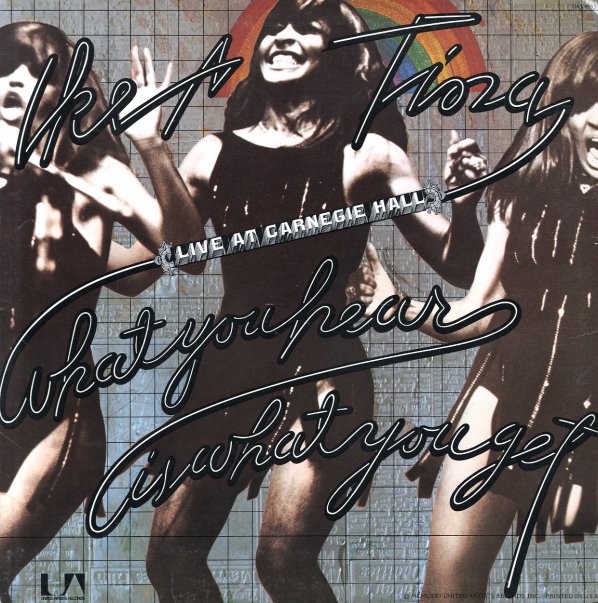 What You Hear Is What You Get – Live At Carnegie Hall

The Ike & Tina Turner Revue shakes the foundation at Carnegie Hall on April Fools Day, 1971! There's a good reason for there being so many live albums by Ike & Tina – it's because they're damn great on stage – and this NYC set is a strong showcase for The Ikettes and The Kings Of Rhythm, too! The group was riding a peak wave of popularity around this time, and they cover a wide variety of songs in a set that's masterfully-paced – starting out slow and building up intensity as it goes! Titles include the Ikettes-led "Piece Of My Heart" and "Everyday People", the thunderous Tina intro "Doin' The Tina Turner", "Sweet Soul Music", "Proud Mary", "I Smell Trouble", "Ike's Tune", "I Want To Take You Higher", "I've Been Loving You Too Long", "Respect" and more.  © 1996-2022, Dusty Groove, Inc.
(Cover has some light edge and surface wear.)

Outta Season
Blue Thumb, Early 70s. Near Mint- Gatefold
LP...$19.99
One of the last albums that Ike & Tina cut together – a great set that's hard, raw, and soulful, with a good rootsy feel that makes them stand out against Ike & Tina's other albums from the time! 13 tracks in all, including "I've Been Loving You Too Long", "Mean Old ... LP, Vinyl record album

Workin' Together
Liberty, 1971. Very Good+
LP...$16.99
A nicely pivotal album by Ike & Tina Turner – one that has them still retaining some of the earthiness of earlier years, yet also honing their groove for the crossover audience that was digging them big at the end of the 60s! The best results of this shift is the increasing funk ... LP, Vinyl record album

Best Of The Intruders
Philadelphia International/Legacy, 1970s. Sealed
LP...$16.99
A beautifully-done collection of work from The Intruders – a brilliant package that follows the group from early harmony days into some of their more sophisticated grooves for Philly International in the 70s! The Intruders have a sound that's unlike anyone else we can think of – a ... LP, Vinyl record album