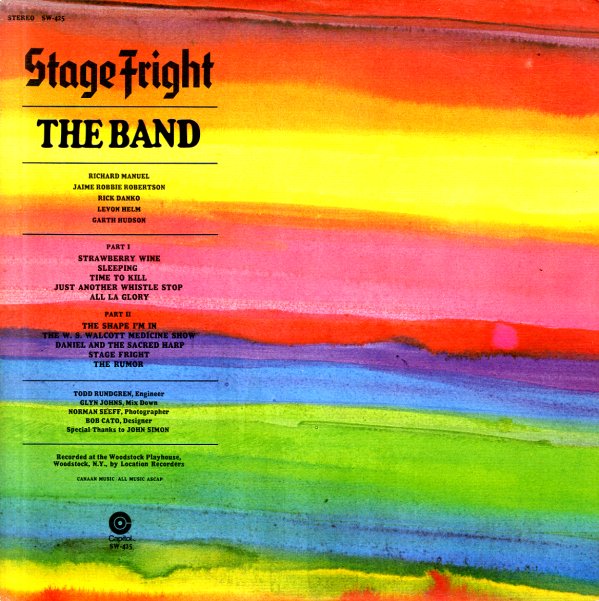 A fantastic classic from The Band – a set that's hardly got them cowering in the corner the way the "stage fright" title might imply – and which instead seems to have the group at their most confident during the early years, effortlessly spinning impeccable musicianship and some surprisingly biting lyrics! The young Robbie Robertson is on guitar, Garth Hudson warms things up with organ lines, and vocals are handled by the shifting array of other players in the lead – Rick Danko, Levon Helm, and Richard Manuel. Titles include "The Shape I'm In", "Sleeping", "Strawberry Wine", "Just Another Whistle Stop", "Daniel & The Sacred Harp", "Stage Fright", and "Time To Kill".  © 1996-2023, Dusty Groove, Inc.
(Lime green label pressing in a textured cover, with a split top seam held by clear tape, some splitting on the spine, and light surface wear.)

Islands
Capitol, 1977. Very Good+
LP...$5.99
A truly underappreciated later album from The Band, made after they decided to hang it up as a touring act – one that holds up SO much better than it's given credit for, by thier die hard fans and even The Band itself – but it works for us! The Band's most legendary first couple of ... LP, Vinyl record album

Rock Of Ages – The Band In Concert
Capitol, 1972. Near Mint- 2LP Gatefold
LP...$34.99
The Band's epic double live album from '72, when they were at their peak – arguably a more exciting listening experience than even their best studio albums, which they always (wisely) considered a different universe then the live stage. Ever ambitious, The Band commissioned Allen Toussaint, ... LP, Vinyl record album

Band
Capitol, 1969. Very Good+ Gatefold
LP...$19.99 (CD...$3.99)
Maybe not the first album from the legendary Band – but a record in which the group get everything completely right all the way through – and sparkle with that special sound that continues to influence generations of music makers, and music lovers! All the great elements the group were ... LP, Vinyl record album

Music From Big Pink
Capitol, 1968. Very Good+ Gatefold
LP...$38.99 (CD...$5.99)
The landmark first album from The Band – and along with the follow-up, it's among the greatest records of its time – which is all the more astounding given how independent of late 60s trends it is! Each member of The Band brings such inimitable textures – Garth Hudson's imposing ... LP, Vinyl record album

Mind Games
Capitol, 1973. Near Mint-
LP...$14.99 (CD...$9.99)
The great John Lennon album from 1973 – still in an exhilaratingly creative mode with strong Plastic Ono traces, even if the overall effect is more mainstream friendly – ultimately, an album that stands incredibly well on its own, even if its something of a bridge to John's rock and ... LP, Vinyl record album

London Town
Capitol, 1978. Very Good+
LP...$6.99
Not as guitarry or AM-pop heavy as the group's earlier classics, but still a pretty nice little record nonetheless – filled with the kind of playful McCartney tunes that we've always loved, and carried off with an undeniable charm. Includes the hit "With A Little Luck", plus "F ... LP, Vinyl record album

Pet Sounds
Capitol, 1966. Near Mint-
LP...$129.99
One of the greatest records of all time – and don't you forget it! Despite the countless lines of type that have been written about this record, nothing does it full justice like an all-through listen – something we're reminded of every time we put this one on the turntable, which is a ... LP, Vinyl record album