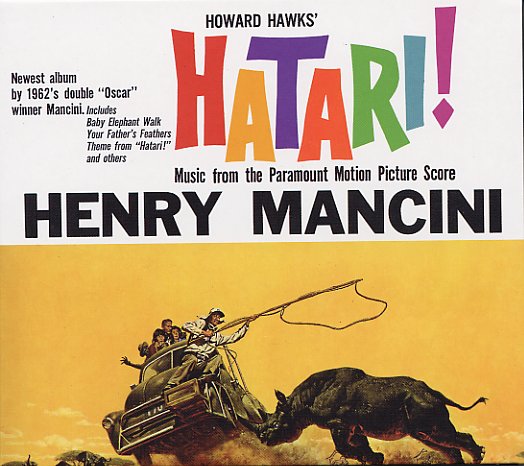 Mancini's light lilting groovy score to this flop of a film by Howard Hawks! Again, the score is better remembered than the film – probably because it gave the world the great cut "Baby Elephant Walk", a goofy little number that still gets churned up a lot today. There's lots of other nice bits like that one on here, including "Big Band Bwana", "Night Side", "Crocodile Go Home", and "Theme From Hatari".  © 1996-2020, Dusty Groove, Inc.
(Living Stereo pressing with deep groove. Cover has a half split top seam and some light wear.)

Disinhairited
RCA, Late 60s. Very Good+ Gatefold
LP...$4.99
A pretty great follow-up to the original Hair soundtrack – featuring tracks that were outtakes from the musical, presented here with notes, a cool gatefold package, and backings conducted by Galt MacDermot himself! The tracks are all pretty great – lots of them short and really messed ... LP, Vinyl record album

Wild Eye – Original Soundtrack
RCA, 1968. Sealed
LP...$5.99
A groovy little Italian soundtrack – straight in some parts, but very nice in others! There's some sweet tunes that features wordless female vocals – in the mode of work by Armando Trovajoli or Ennio Morricone from the time – and there's other tunes that have a dancing groovy ... LP, Vinyl record album

Bliss Of Mrs Blossom
RCA, 1968. Sealed
LP...$6.99
The film's a very strange comedy starring Shirley MacLaine, and the soundtrack's pretty wild too! Most tracks are groovy 60s tunes with a mix of easy styles, and the album's also got a few nice vocal numbers that space things out nicely – and overall, the soundtrack's a real mix of styles ... LP, Vinyl record album

Music From A Fistful Of Dollars, For A Few Dollars More, & The Good The Bad & The Ugly
RCA, Late 60s. Very Good-
LP...$2.99
Hugo's covering all bases here – as he makes his way through a number of late 60s Morricone spaghetti western themes, all done with his groovier than usual twist on the material! The Montenegro touches here include some augmented rhythms – snapping the tunes along with a much modder ... LP, Vinyl record album