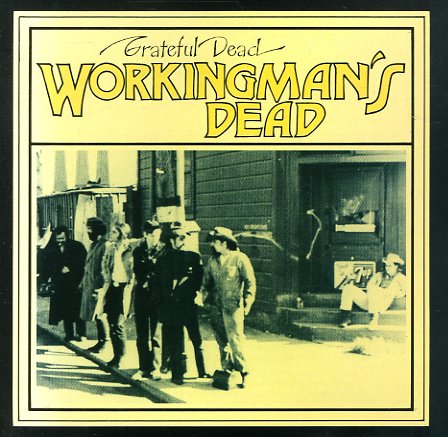 One of the first giant hits by the Grateful Dead – and a record that has the group tightening things up a bit more, and stepping into some of the country-tinged territory of The Byrds and Flying Burrito Brothers! Turns out, the move is a great one – as the songs come across with a real down to earth charm that maybe humanizes the group a bit more for the uninitiated listener – a mix of northern Cali pastoral with some of the musical dexterity they'd brought with them from the Haight – folded together perfectly, with a quality that's made the album one of their best-remembered over the decades. Titles include "Uncle John's Band" – maybe their biggest hit at the time – plus "Dire Wolf", "New Speedway Boogie", "Cumberland Blues", "Casey Jones", "Easy Wind", "High Time", and "Black Peter".  © 1996-2022, Dusty Groove, Inc.
(Burbank label pressing, with upside down back cover image.)

Wake Of The Flood
Grateful Dead, 1973. Near Mint-
LP...$44.99
The first album issued by the Grateful Dead on their own label – a setting that might make you think they'd act with less control than when at Warner Brothers, but which actually seems to have them doing the reverse! The whole thing's a great back-to-basics effort – sharp songs, rootsy ... LP, Vinyl record album

Mesopotamia
Warner, 1982. Near Mint-
LP...$14.99
A real shift for the B-52s – a record that's got quite a different sound than the group's first two full albums, and which really shows them as having a more diverse approach than might have been expected! The key change here is David Byrne – who's on the record as both a producer and ... LP, Vinyl record album