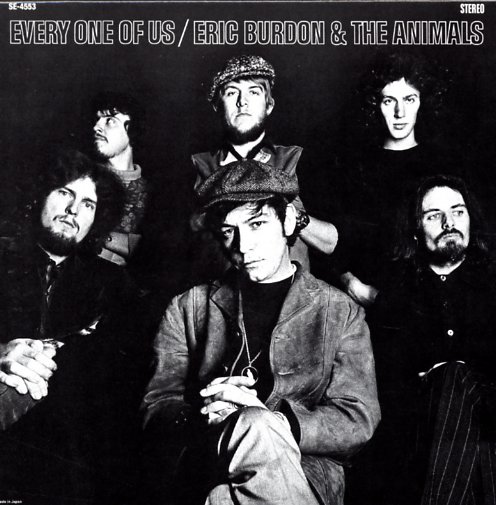 Another gem from The Animals' overlooked late 60s years on MGM – a time when the group were easily making some of the most inventive music on the label! The styles here are even wider than before – definitely an attempt to showcase "every one of us" that made up the group – in a blend of spacey sounds, gentle folksy moments, and some of the rougher tones of previous MGM records. Many titles were written only by Burdon – a bit of a change from before – and showcase an increased use of acoustic guitar alongside his bleak vocals. Titles include "The Immigrant Lad", "Year Of The Guru", "Serenade To A Sweet Lady", "White Houses", "New York 1963/America 1968", and "Uppers & Downers". CD features a bonus single version of "White Houses".  © 1996-2022, Dusty Groove, Inc.
(Blue and gold label stereo pressing. Cover has light surface wear.)

Eric Is Here
MGM, 1967. Very Good+
LP...$14.99
A very cool record – and a bit different than some of the other MGM material by the Animals! Eric Burdon's soulful vocals are in the lead, and set up here with great backings from Benny Golson and Horace Ott – both of whom bring a strong current of soul jazz to the set, for a mod ... LP, Vinyl record album

Twain Shall Meet
MGM, 1968. Very Good+
LP...$46.99 64.99
Great later work from The Animals – a set that's not as tripped-out as some of their other late 60s work, and which almost starts to show Eric Burdon's rising love of soul and funk! The sound is still pretty rockish overall – but there's some great use of bass rumbling at the bottom ... LP, Vinyl record album

Love Is
MGM, 1968. Near Mint- 2LP Gatefold
LP...$19.99
A fantastic double-length set from The Animals – recorded in LA in the late 60s, and with plenty of great Sunset Strip influences in the mix! The band here is different than before – with Zoot Money handling both organ and piano, plus a bit of vocals, and Andy Summers joining in on ... LP, Vinyl record album

Animalization
MGM, 1966. Very Good+
LP...$19.99 24.99 (LP...$28.99)
A record that has The Animals at the crossroads – working without the piano and organ of Alan Price, but with an even more rising sense of power from Eric Burdon – who's really coming into his own as a singer, and turning out to be a surprisingly great songwriter too! The group still ... LP, Vinyl record album