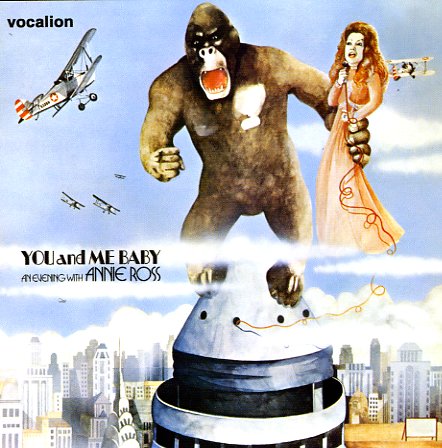 You & Me Baby – An Evening With Annie Ross

Very groovy 70s work from Annie Ross – an album that's quite different than her vocalese records of the 50s, but equally great in its own sort of way! Ross is still singing jazz here, but there's often a bit of soul in the mix too – that hip blend of styles that you might find in the music of Annie's Brit contemporary Georgie Fame around the same time! Ross really takes the lyrics of the tunes in a great way – often with a touch more feeling than before, yet still with that great sense of timing and wit that made her one of the freshest singers to hit the American shores in the postwar years. As the title implies, the performance is a live one – and Annie's got some great backing by a small combo that features electric piano and organ from Dave MacRae, both of which further a 70s sort of groove on the cuts! Titles include an incredible version of the King Crimson track "Cat Food" – the bossa numbers "The Gentle Rain", "Wave", and "Crickets Sing For Anamaria" – and cool takes on Dave Brubeck's "Blue Rondo A La Turk", Randy Newman's "Love Story", Bob Dylan's "Country Pie", and the Beach Boys' "Vegetables". All those weird tunes really make the album a charmer – an overlooked gem from these sometimes-lost years of Annie's career!  © 1996-2021, Dusty Groove, Inc.
(Back cover has some light aging, and a light yellowed shadow of tape where an old article had been taped. Front is nice.)