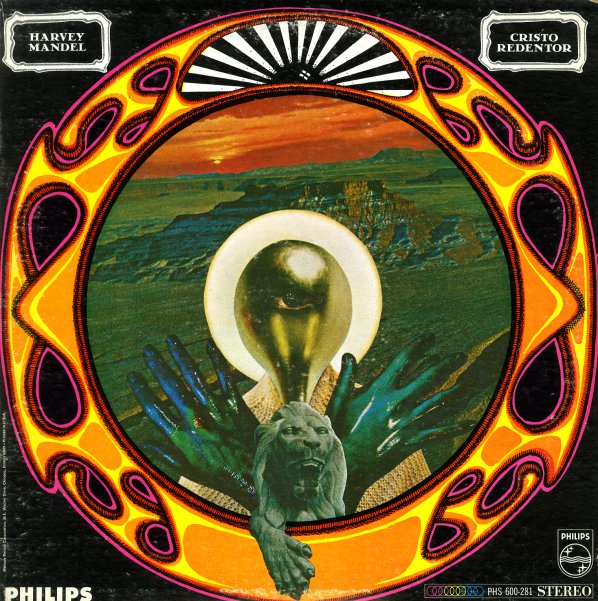 One of the biggest moments in the career of guitarist Harvey Mandel – an album based around his famous cover of "Cristo Redentor", a tune written by Duke Pearson for one of Donald Byrd's "with voices" albums, which was then turned into a spacey guitar classic by Mandel's trippy work. The tune's here in full force – backed up by an album of like minded tunes – 60s trippy guitar mixed with jazz influences, in a messed up Bay Area style that was every bit the product of its time as more famous rock albums coming out of the San Francisco scene. Titles include "Cristo Redentor", "Before Six", "The Lark", "Snake", "Long Wait", "Bradley's Barn", and "You Can't Tell Me".  © 1996-2022, Dusty Groove, Inc.
(Black label stereo pressing. Cover has both seams taped, drill hole, light surface wear.)

Games Guitars Play
Philips, 1969. Very Good+
LP...$16.99
Guitars playing plenty of games here – easy to do when in the godlike hands of Harvey Mandel – a guitarist rooted in blues, but also with lots of psychedelic inclinations as well! This album's one of Harvey's best as a solo act – and gets some sweet fuzzy production by the ... LP, Vinyl record album

Introducing Pete Rugolo & His Orchestra (10 inch LP)
Philips (UK), Early 50s. Very Good
LP...$24.99
Great early work from Pete Rugolo – a Kentonite who mostly recorded for Mercury, and did some great arrangements on Capitol – but who also turned in some great early work on Columbia too! The work is great – nicely dynamic and modern, but also nicely swinging – and titles ... LP, Vinyl record album

Doldinger Jazz Made In Germany
Philips (Germany), 1963. Very Good
LP...$36.99
A fantastic set from the young Klaus Doldinger – hardly jazz made in Germany, as the whole thing has a smoking soul jazz quality to rival the best on Prestige Records at the time! Klaus plays tenor throughout – in a fantastic combo that features Hammond organ from the great Ingfried ... LP, Vinyl record album

Gil Evans
Ampex, Early 70s. Near Mint-
LP...$16.99
A great record – and on that hardly ever shows up on the radar screen of Gil's career! The session was recorded with a very hip group that includes Billy Harper on tenor and flute, Elvin Jones and Alphonze Mouzon on drums, Joe Beck on electric guitar, and Herb Bushler on Fender bass. The ... LP, Vinyl record album

All Night Session Vol 3
Contemporary, 1956. Near Mint-
LP...$24.99
A noteworthy session from pianist Hampton Hawes – a rare quartet session from the 50s (at a time when Hawes was mostly working in trios) – and also a three volume set of releases, all recorded in the space of a single night! The album is truly an All Night Session – as the ... LP, Vinyl record album

Wess To Memphis
Enterprise/Stax, Early 70s. Sealed Gatefold
LP...$14.99
Following in the tracks of another funky flute player, Herbie Mann, Frank Wess heads south, and records an album of tunes that mix his jazzy flute with the hipper funky styles of the early 70s southern studio scene. Despite the title, this one was actually recorded at Muscle Shoals, not Memphis, ... LP, Vinyl record album