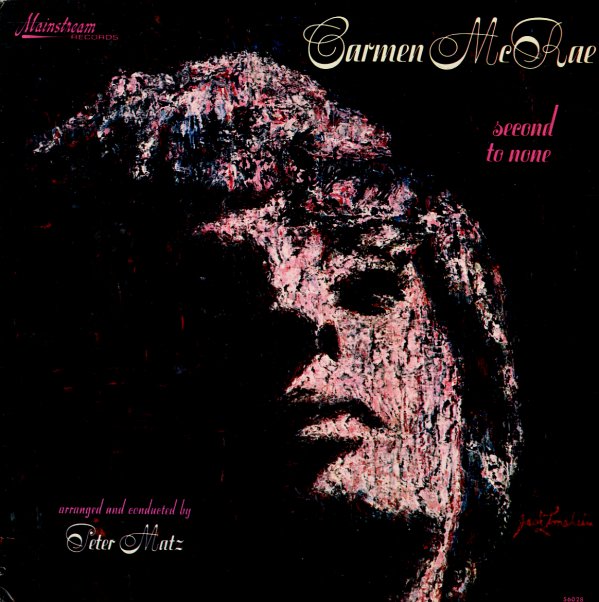 One of Carmen McRae's best records of the 60s – an album done with beautiful arrangements from Peter Matz, who's probably best known for his work with Barbara Streisand at the time – and who really helps McRae take her music to the next level! Carmen was already one of the most sophisticated jazz singers of the 50s – but in the following decade, she really perfected her phrasing – and was able to grab material and make it completely her own – all with a mode that's steeped in the special sort of inflections a jazz singer can bring, but which is also able to maybe be even more adult in approach overall. The strings soar, the percussion is fairly spare and often a little bit off kilter – and Carmen emphasizes her phrasing and more earthy tendencies without any empty histrionics – on titles that include "In The Love Vain", "The Music Makes Me Dance", "Too Good", "Once Upon A Summertime", "The Night Has A Thousand Eyes", and "Cloudy Morning".  © 1996-2022, Dusty Groove, Inc.
(Mono pressing. Cover has light wear and some aging.)

Live In Japan
Mainstream, 1973. Near Mint- 2LP Gatefold
LP...$9.99
A 70s set from Sarah Vaughan, but one that's recorded in a classic small combo mode – acoustic overall, and a bit of a change from her other sessions for Mainstream Records! The date's a live one, and the tracks are taken at a looser level than some of Vaughan's studio work – a bit ... LP, Vinyl record album

Orchestra Arranged & Conducted By Michel Legrand
Mainstream, 1972. Very Good+ Gatefold
LP...$2.99
A beautiful collaboration between Sarah Vaughan and Michel Legrand – and easily one of Sarah's greatest albums of the 70s! As he was doing with other singers at the time, Legrand helps Vaughan hit a new level of sophistication here – bringing in tunes that really get past simple pop ... LP, Vinyl record album

Time In My Life
Mainstream, 1971. Very Good+ Gatefold
LP...$9.99
Sarah Vaughn's looking pretty groovy on the cover of this album, and she's sounding pretty groovy too – thanks to some sweet 70s backings from Ernie Wilkins! The style isn't exactly funky, but it's got some fully soulful sounds, and some great electric moments too – modes that almost ... LP, Vinyl record album