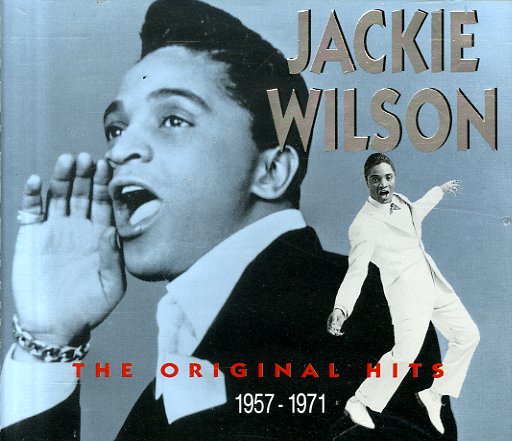 Lonely Teardrops (with bonus track)
Brunswick/Ultra Vybe (Japan), 1959. Used
CD...$9.99
Jackie Wilson really takes off here – leading the set with his landmark title track, then moving into a range of tracks that really display his tremendous vocal talents! The setting is a formative one in early soul – not entirely free from pop, but directed by the singer into really ... CD

He's So Fine/Lonely Teardrops
Brunswick/Edsel (UK), 1958/1959. Used
CD...$9.99
Jackie Wilson's first 2 albums – back to back on one CD! He's So Fine is a hard-rocking batch of tunes that captures Jackie at his early best! The tunes here really crossover wonderfully – drawing on Jackie's rich vocal history with The Dominoes and The Drifters – but also ... CD

Sings The World's Greatest Melodies/Spotlight On Jackie Wilson
Brunswick/Edsel (UK), 1963/1965. Used
CD...$14.99
2 unusual albums from Jackie – back to back on one CD. Jackie Wilson Sings The Worlds Greatest Melodies is a strange one – as Jackie expands his horizons to include a range of global pop tunes that include "Alone At Last", "Pianissimo", "My Eager Heart", ... CD

By Special Request/At The Copa
Brunswick/Edsel (UK), 1961/1962. Used
CD...$4.99
2 of Jackie's more unusual albums for Brunswick – both from the early New York years, back to back on one CD. By Special Request features Jackie running through a set of mostly standards – doing them in a jazzier style than usual, but all with the soulful vocals that you'd expect. ... CD

This Love Is Real/You Got Me Walking
Brunswick/Edsel (UK), 1970/1971. Used
CD...$14.99
Late late work by Jackie Wilson – 2 of his last albums for Brunswick! This Love Is Real was recorded in 1970 – but thanks to a wise decision to move his soul base of operations to the Chicago scene, Jackie's still going strong – and with a groove that we like even better than on ... CD

Beautiful Day/Nobody But You
Brunswick/Edsel (UK), 1973/1976. Used
CD...$13.99 16.99
2 late Brunswick albums by Jackie Wilson – back to back on one CD! Beautiful Day is killer Chicago soul from Jackie – with stone cold Brunswick production by Carl Davis, and lots of arrangements by Willie Henderson. The title cut "Beautiful Day" is a soaring original tune ... CD

So Much/Jackie Sings The Blues
Brunswick/Edsel (UK), 1959/1960. Used
CD...$13.99
2 early albums by Jackie Wilson – back to back on one CD! Jackie Sings The Blues is one of Jackie's greatest records – and one of his most soulful, too! The album features Jackie doing some great soul versions of bluesy tracks, with backing that's sort of in the style of his other ... CD

Baby Boy/Man On The Inside
Brunswick/West Side (UK), 1970. Used
CD...$16.99
2 excellent albums of blusey soul originally issued on the legendary Brunswick label! Both records feature work by southern singers not usually the stock of the mostly-Chicago Brunswick label – and both artists were great singers whose original work on vinyl is quite hard to come by. Fred ... CD

Half A Love (with bonus tracks)
Brunswick/Solid (Japan), 1975. Used
CD...$11.99 (CD...$16.99)
Nothing half about The Chi-Lites at all – as the group were always tremendous during their famous run at Brunswick Records – able to come across perfectly on mellow ballads and more upbeat numbers! This set is a wonderful illustration of the really unique Chicago-based approach that ... CD