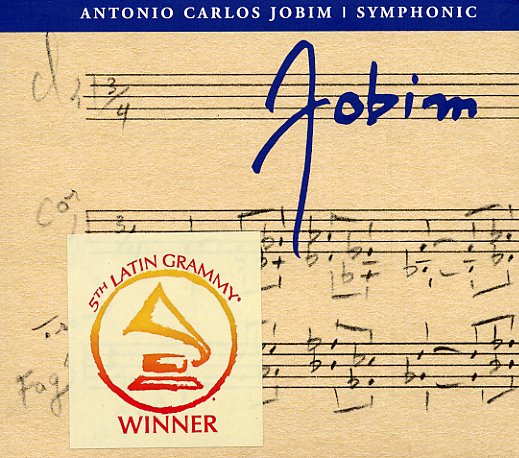 A beautiful set of symphonic tracks based around the work of Antonio Carlos Jobim – work that stretches back to the 50s, up through 60s bossa nova, and even includes some of Jobim's more complicated orchestrations from the 70s! The music is done in the arch-baroque style of other titles on the Biscoito Fino label – with a full symphony orchestra, smaller instrumental groupings, and even some strong vocal performances that drift in and out of the music. The set features re-interpretations of original arrangements by Jobim, Nelson Riddle, Deodato, Claus Ogerman, and others – and was put together by Paulo Jobim. Titles include "Lenda", "Macumba", "O Homem", "Saudade Do Brasil", "Matita Pere", "Chora Coracao", "Bangzalia", "Garota De Ipanema", and "Gabriela". Very nicely done 2CD set!  © 1996-2023, Dusty Groove, Inc.
(Barcode has a cutout hole.)

Wave (Japanese pressing)
A&M/CTI (Japan), 1967. Used
CD...$19.99
A stunning mix of talents that brings the heavenly piano and guitar of Antonio Carlos Jobim into play with the lush, but light arrangements of Claus Ogerman – a swirling mix of post-bossa loveliness that redefines Jobim's sound, and opens up new avenues for exploration in sound! The ... CD

Em Minas Ao Vivo – Piano E Voz (Brazilian pressing)
Biscoito Fino (Brazil), 1981. Used
CD...$14.99
The magic of Jobim lives once again – in this rare live recording from 1981! The performance is wonderfully intimate – and features Jobim on piano and vocals, with no other backing, plus passages in which he talks about his music with the audience, creating a really personal approach ... CD

Wonderful World Of Antonio Carlos Jobim
Warner (UK), 1965. Used
CD...$7.99 (LP...$9.99)
The wonderful world of Antonio Carlos Jobim gets a whole lot bigger on this American release from the 60s – thanks to a collaboration with the great Nelson Riddle, the arranger whose work made so many of Frank Sinatra's albums so great! Riddle really understands the jazzy elements at the ... CD

Terra Brasilis
Warner (Japan), 1980. Used
CD...$5.99
Pretty great sounds from the legendary Antonio Carlos Jobim – an album cut a bit later than his bossa years, but with a darkly sophisticated sound that's pretty darn compelling! The album features larger orchestrations by Claus Ogerman, and in a way, it's similar to the Jobim album on Decca ... CD

Outro Rio – Another River
Adventure Music, 2007. Used
CD...$6.99
A great mix of contemporary acoustic and Brazilian jazz modes – heard here on an album recorded in Rio, but with a fair bit of American guitar influences as well! The production is great, and really gets at the rich sound of Ricardo Silveira's guitar – and backing ranges from acoustic ... CD

Brasilianos
Adventure Music, 2006. Used
CD...$6.99 8.99
Beautiful work from Brazilian mandolin player Hamilton De Holanda – working here on a 10-stringed version of his instrument, in a sound that's warmly emotive and filled with imagination! The overall groove is quite gentle – but Hamilton's strings leap out with soaring energy on the ... CD