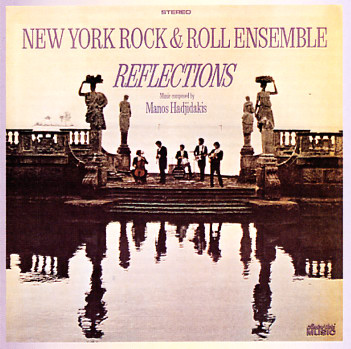 Quite possibly the most interesting album ever from the New York Rock & Roll Ensemble – a set done in close collaboration with Greek soundtrack maestro Manos Hadjidakis! The tunes are all penned by Hadjidakis, and they're performed by the group in an ambitious mode that has more than a few echoes of their Balkan heritage – bits of oboe, cello, and guitar used in ways that have a distinctly Greek-sounding flavor – supported by more conventional rock-styled rhythms that still manage to have a quality that's a bit more majestic than just regular small group rocking! Vocals are all in English, penned by members of the band on top of Hadjidakis' compositions – and the album's a great crossroads between 60s psyche and soundtrack genres. Titles include "Dedication", "The Day", "Love Her", "Dance Of The Dogs", "Kemal", "Orpheus", "Noble Dame", and "Better Way".  © 1996-2021, Dusty Groove, Inc.
(Yellow label stereo pressing. Cover has a cutout notch.)