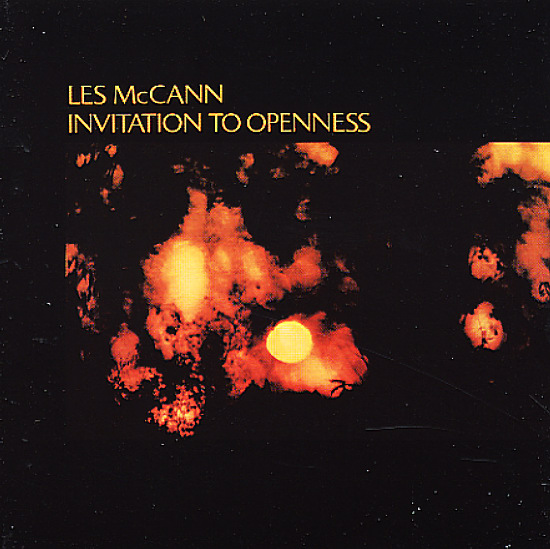 Wild electric work from Les McCann – an album of free, open sounds that's quite a change from his styles of the 60s – and from most of his other work of the 70s too! Side one features an extended 26 minute track titled "The Lovers" – a slow-building number that has Les on sublime Fender Rhodes, as things build slowly with this really spiritual current that comes from the addition of Yusef Lateef on reeds, Cornell Dupree and David Spinozza on guitar, Corky Hale on harp, and both Bernard Purdie and Alphonse Mouzon on drums! The track is loose, but builds into some great funky moments – almost a keyboard version of electric Miles Davis at the time, but a lot more soulful. And side two continues the heavy keyboard vibe – with a killer remake of Les' classic "Beaux J Poo Poo" and a similar "Poo Pye McGoochie", both with the kind of choppy funky grooves Les laid down with Eddie Harris a few years prior!  © 1996-2023, Dusty Groove, Inc.
(75 Rockefeller label pressing. Vinyl is clean, but has light oxidation that plays with faint surface noise throughout. Cover has light wear.)

Beaux J Pooboo
Limelight, Mid 60s. Very Good+
LP...$4.99
A very groovy album from pianist Les McCann – one that adds some great guitar work from Vincent Corrao to the usual trio – which features the great Paul Humphrey on drums and Victor Gaskin on bass! The guitar opens the tunes up a bit more than usual, and lets Les and crew move from ... LP, Vinyl record album

Les McCann Plays The Hits
Limelight, 1966. Very Good+
LP...$4.99 9.99
Play the hits Les does – but in a very groovy way! He's got a nice little combo on the record that includes Plas Johnson and Seldon Powell on saxes, plus some Latin percussion by Johnny Pacheco and Ron Rich. The great Leroy Vinnegar rounds out the group on bass, providing the rich strong ... LP, Vinyl record album