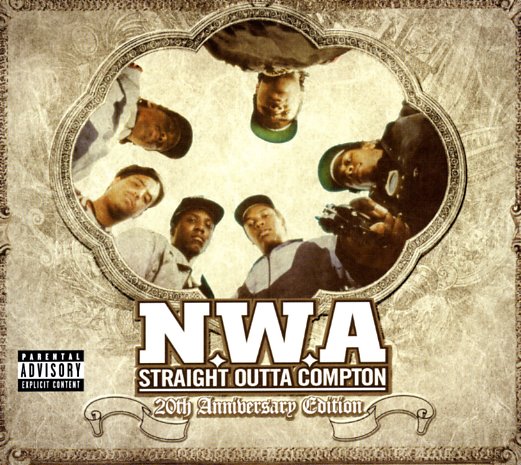 Benchmark west coast gansta – and one of the hardest hitting albums of any genre of the past couple decades. We're not gonna lie, we played this record to death when it came out – and it still holds up better than most of the material put out by former NWA's, and most of the West Coast sound-alikes that popped up later. For better and for worse, the start of an era, and now it's back and nicely remastered! Features "Straight Outta Compton", "Express Yourself", "Dopeman (rmx)", "I Ain't The One", the title track, "Gangsta Gangsta" and the only record ever condemned by the FBI, "F*ck Tha Police" and more. 5 bonus tracks on the 20th Anniversary edition: "F**k Tha Police" by Bones Thugs-N-Harmony, "Gangsta Gangsta" by Snoop Dogg & C-Murder, "Dopeman" by Mack 10, "If It Ain't Ruff" by WC and "Comton's N The House" (live) by Dr Dre & MC Ren.  © 1996-2021, Dusty Groove, Inc.
(Out of print.)