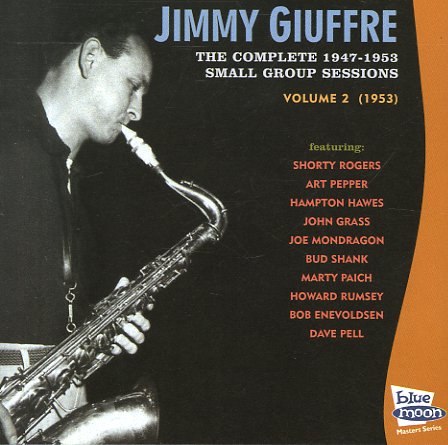 A much-needed collection of the early work of Jimmy Guiffre – one of the best sax talents of the west coast 50s scene, and an ever-committed modernist whose work here displays a keen early ear for the fresh and the new! The tunes appear to have been released on a variety of different labels – from RCA to Decca and a number of smaller imprints – and in most cases, Jimmy's blowing with a group led by a slightly more famous LA arranger or leader. The set features work in groups led by Shelly Manne, Shorty Rogers and Boots Brown – and titles include "Bunny", "Mallets", "Fugue", "Breakfast Ball", "Hip Boots", "Morpho", "Diablo's Dance", "The Pesky Serpent", "Powder Puff", and "Afrodesia". 20 tracks in all!  © 1996-2021, Dusty Groove, Inc.
(Out of print.)