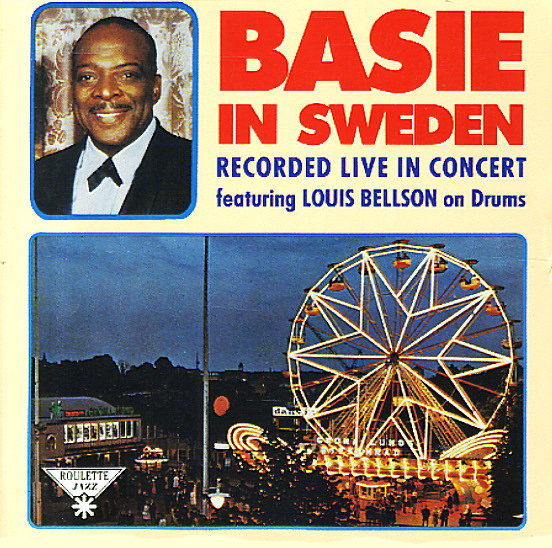 One of the most hard-hitting Count Basie albums from the Roulette Records years – and that's saying a lot, given the power of Basie at the time! The set was recorded in Sweden, with a kind of triple-time energy that really has the whole thing burning right from the start – as the group's driven onward by some bold work on drums from Louis Bellson – who's working here with a lineup that includes Frank Wess and Frank Foster on tenor, Marshall Royal on alto, and Thad Jones on trumpet. There's a slight rawness to the recording – still as clear as other Roulette sessions, but with a bit more "liveness" too – a sense of place that really helps the performances sparkle. The whole thing's great – and titles include "Little Pony", "Plymouth Rock", "Backwater Blues", "Who Me", and "April In Paris".  © 1996-2023, Dusty Groove, Inc.
(Out of print.)

Basie (aka E=MC2) (Japanese paper sleeve edition)
Roulette (Japan), 1957. Used
CD...$14.99
One of THE seminal Basie albums of all time – and a masterful pairing between the Count and arranger Neal Hefti! Hefti has an amazing ear for the Basie groove, and he works here to re-fit the overall sound of the group with a tighter, more fluid approach – one that ensured that they'd ... CD

Count Basie & The Kansas City Seven
MCA/Impulse, 1962. Used
CD...$4.99
Stripped-down Count Basie from the start of the 60s – a great little set that has the Count working with some of the best players from his larger group, in a session of even more intimate small combo material! The sounds here echo the Basie groove of the earlier years, but the overall ... CD

Birdland All Stars Live At Carnegie Hall
Roulette, 1954. Used 2 CDs
CD...$8.99
A smoking set of all-star performances – recorded at Carnegie Hall in 1954, and with a sense of tremendous talent that may well blow away some of the Jazz At The Philharmonic sets of the time! The material here is heavy on Count Basie performances – excellent material from that period ... CD

Randy Weston – Mosaic Select (Piano A La Mode/Little Miles/Live At The Five Spot/Unissued Session/Uhuru Afrika/Highlife)
Mosaic/United Artists/Roulette, Late 50s/Early 60s. Used 3 CDs
CD...$49.99 59.99
Some of the most important work ever recorded by Randy Weston – 5 early albums that really pushed the boundaries of modern jazz! First up on the set is Little Niles – a fantastic set that features some of Weston's best early compositions – angular and Monk-ish numbers, but with a ... CD

Memories Ad Lib
Roulette, 1958. Used
CD...$11.99
A great little record from this legendary pair – a late nite, bluesy sort of record that's a nice change from some of the Joe Williams/Count Basie material on Verve! Basie plays Hammond on part of the record – and the organ makes a wonderful accompaniment to Joe's vocals – played ... CD