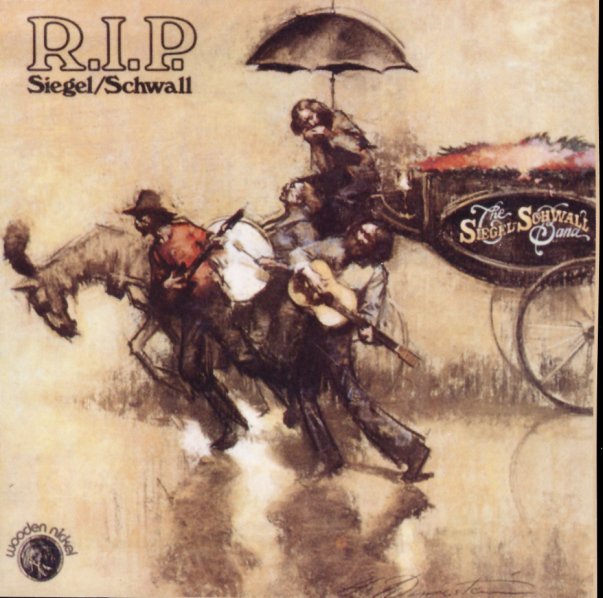 A fond farewell to the Siegel Schwall Band, as you might guess from the title – one last studio effort from the group, before Corky Siegel took off on his solo career, and Jim Schwall concentrated on farming! The set's a bit different than the rest of their initial albums for Wooden Nickel – in that it has the group paying a final tribute to their influences – running through songs by an array of interesting talents, from John Prine, to Jimmy Reed, Muddy Waters, Lieber & Stoller, and Johnny Bond – all done in the relaxed, yet well-crafted style that made these guys such stalwarts on the Chicago scene. Titles include "Pretty Good", "Take Out Some Insurance", "Wild About My Lovin", "I'm A Hog For You Baby", "Tell Me Mama", "It's Too Short", and "Long Distance Call".  © 1996-2021, Dusty Groove, Inc.

Sleepy Hollow
Wooden Nickel, 1974. Near Mint-
LP...$4.99
Nothing sleepy here, as the Siegel Schwall Band are very much in the lean, bluesy territory that made them such a standout act on the Chicago scene of the 70s! These guys have a real Old Town blend of folk roots and blues inspirations – never trying to force things with either too much ... LP, Vinyl record album

Siegel Schwall Band (Wooden Nickel)
Wooden Nickel, 1971. Very Good Gatefold
LP...$2.99
A classic set from this legendary Chicago group of the early 70s – a combo led by Jim Schwall and Corky Siegel – two blue-eyed Windy City musicians who were unabashedly in love with the blues music of their scene! Unlike some of the later crossover blues albums of the 70s, these guys ... LP, Vinyl record album

Siegel-Schwall '70
Vanguard, 1970. Near Mint-
LP...$11.99
The Siegel Schwall Band change things up a bit here – leaving behind the rootsy Sam Charters production of their first few albums for the the heady sound of Dunwich – and picking up just a bit of electric piano and electric bass in the process! The style is still rooted in blues, but ... LP, Vinyl record album

Stand In The Fire – Warren Zevon Recorded Live At The Roxy
Asylum, 1980. Very Good+
LP...$14.99
Warren Zevon at the height of his powers – letting his explosive songwriting skills really blossom in front of a crowed at LA's Roxy who are clearly in love with his talents! In an era when most live albums were captured in stadiums, Zevon shows that the small club really lets a singer like ... LP, Vinyl record album