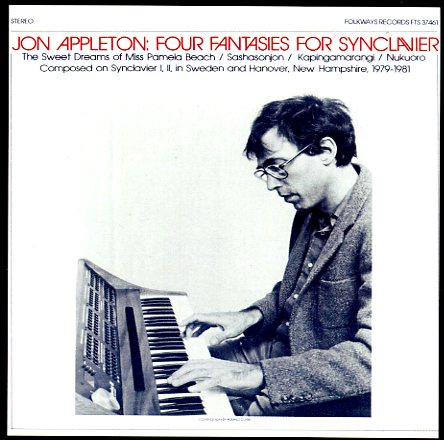 Great long-form work from electronics wizard Jon Appleton – performed in the early 80s on the synclavier, but with the same sort of sensitivity as his early electronics experiments! Most tunes here are relatively extended – and work together with a slightly poetic feel that lives up to the "fantasies" in the title – dark soundscapes with some occasionally lyrical moments, but played in a way that's definitely left of center! Titles include "Kapingamarangi", "Stet", "Sashasonjon", and "The Sweet Dreams Of Miss Pamela Beach".  © 1996-2022, Dusty Groove, Inc.
(Special limited CD – pressed up for us by the Smithsonian Folkways label. Comes with original cover artwork, and the CD also features a PDF file with the original liner notes and other materials from the original record release.)