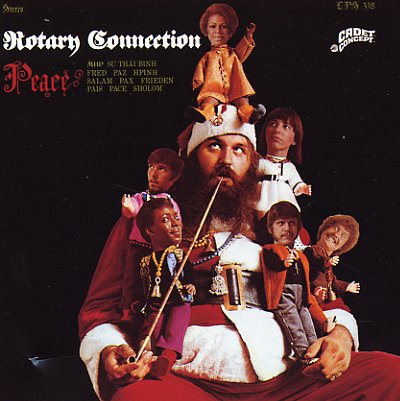 One of the coolest Christmas albums ever – a tripped-out classic from Chicago's legendary Rotary Connection! The album's every bit as wonderful as any of the group's non-Holiday sets for Cadet Records – and maybe even has more to offer, given that the euphoria of the season is thrown into the usual spacey mix! Charles Stepney lays down some totally angelic production – and the record bubbles with heavenly instrumental passages – floating along like clouds, then suddenly exploding into sharp musical moments that provide the perfect backdrop for Minnie Riperton's excellent voice. Most of the tracks are originals, penned as spacey seasonal numbers that bring a whole new sense of spirituality to the end of December – a young, optimistic take on the holiday – which makes for a really unique sort of record! Titles include "Christmas Child", "Opening Round", "Silent Night", "Christmas Love", "Shopping Bag Menagerie", "Peace At Last", "Silent Night Chant", "Sidewalk Santa", and "Last Call For Peace".  © 1996-2021, Dusty Groove, Inc.
(Stereo Cadet Concept pressing. Cover has light wear, a split top seam and lightly bumped corners. Cover and labels have drill holes. Vinyl has two light marks that play with slight surface noise during "Christmas Child" and If Peace Was All We Had.")