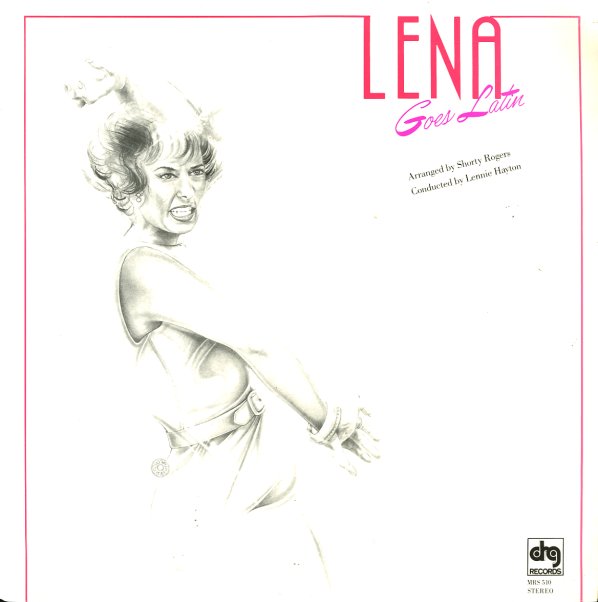 A set that features lots of great arrangements from Shorty Rogers – upbeat and jazzy, in ways that aren't exactly the Latin modes promised by the title, but still pretty darn great! Rogers his hitting nicely here on all burners – that leaner 60s approach he used in some of his own great records of the time, with rhythms that borrow a bit from bossa and Latin jazz, but turn their elements towards a west coast sort of groove in the end. Lennie Hayton conducts the orchestra, but he's definitely moving in a Rogers-directed mode – much more so than on earlier dates with Lena for RCA. Titles include "Meditation", "More", "Old Devil Moon", "My Blue Heaven", "Cuckoo In The Clock", "From This Moment On", and "Take Me".  © 1996-2021, Dusty Groove, Inc.
(80s issue, still sealed, with a Priceless Collection sticker and small hole.)

Clap Yo' Hands (aka Hi-Lo's In Stereo)
DRG, Mid 50s. Near Mint-
LP...$1.99
Groovy vocal group material from this legendary combo that went onto change the style of harmony vocals for the next 50 years! The group's led by Gene Puerling, who later went onto form the Singers Unlimited for MPS, and the orchestrations are by Frank Comstock – in a line with The Four ... LP, Vinyl record album

Torme Touch (aka Mel Torme & The Marty Paich Dek-Tette)
Bethlehem, Mid 50s. Near Mint-
LP...$7.99
This is Mel Torme's best-ever album, and it's one that we'd recommend to anyone who likes jazz vocals at all – even if you can't usually stand Mel! The Velvet Fog is backed by a great 10-piece group, led by the great Marty Paich, and featuring excellent west coast players like Pete Candoli, ... LP, Vinyl record album

Gentle Rain
Choice, 1978. Sealed
LP...$9.99
Gentle Rain, and a very gentle sound from Irene Kral – a wonderfully intimate album that has the vocalist working with only the piano of Alan Broadbent for accompaniment! Kral's always a pretty expressive singer, but she sounds especially so here – really getting a lot of space to ... LP, Vinyl record album