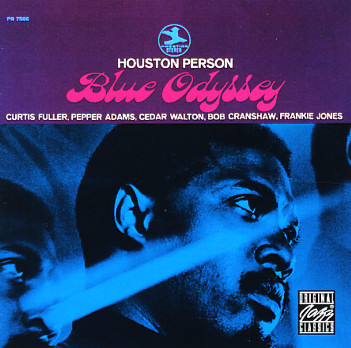 An excellent Houston Person set from the late 60s – and a record that's unlike any other that he did at the time! The groove here is a bit less funky, and a bit more conceptual – kind of a soaring vibe that's still quite soulful, but in less of the stock soul jazz mode that Person was hitting – if that makes any sense! There's almost a modal energy at points – a bit like the sounds coming from Hank Mobley or Lee Morgan in the late 60s – and the group features Cedar Walton on piano, who also arranged the set – so the unusual flavor is definitely one that he brings into play. Other players include Pepper Adams on baritone, Curtis Fuller on trombone, Bob Cranshaw on bass, and Frankie Jones on drums – and titles include "Blue Odyssey", "I Love You Yes I Do "Holy Land", "Starrburst", and "Funky London".  © 1996-2021, Dusty Groove, Inc.
(Out of print. Booklet appears to be signed by the artist and inscribed to the previous owner.)

Broken Windows, Empty Hallways/Sweet Buns & Barbeque
Prestige, 1972. Used
CD...$9.99
2 sides of sweet electric grooving from Houston Person – records that feature his soulful tenor set in larger arrangements than on his earlier small combo Prestige sessions, in a mode that's a bit like some of the larger jazz sets coming out on CTI and Kudu at the time! Like Stanley ... CD

Legends Of Acid Jazz – Black Cat!/You Talk That Talk!
Prestige, 1970/1971. Used
CD...$22.99
A pair of funky killers from tenorist Gene Ammons! Black Cat is one of the great funky albums that Gene Ammons cut for Prestige at the start of the 70s – quite different than his earlier work for the label, and a very different showcase for his tenor genius! The whole lineup here is amazing ... CD

Out Front! (with unissued bonus tracks)
Prestige/OJC, 1964. Used
CD...$15.99
One of the greatest records ever from pianist Jaki Byard – a razor-sharp set that features some tremendous work from tenorist Booker Ervin and trumpeter Richard Williams! Byard starts out the set in trio formation for the first two numbers – echoing the great qualities of his earlier ... CD

Cookin' With The Miles Davis Quintet (20 bit remaster)
Prestige, 1957. Used
CD...$6.99 (LP...$21.99)
A seminal set from the young Miles Davis – working here on one of his legendary pairings with tenorist John Coltrane, who's equally important to the sound of the session as Miles! Tracks are long, and mix up some modern modes with remade ballads – both sublime expressions of the new ... CD

Quiet Kenny (RVG remaster series)
Prestige, 1959. Used
CD...$4.99
Kenny may be quiet, but he's never muted – and the record is far from the sleepy session you might guess from the title! The album's a real standout in the Dorham catalog – a set that let's Kenny's trumpet sparkle beautifully in a quartet that includes piano from Tommy Flanagan, bass ... CD