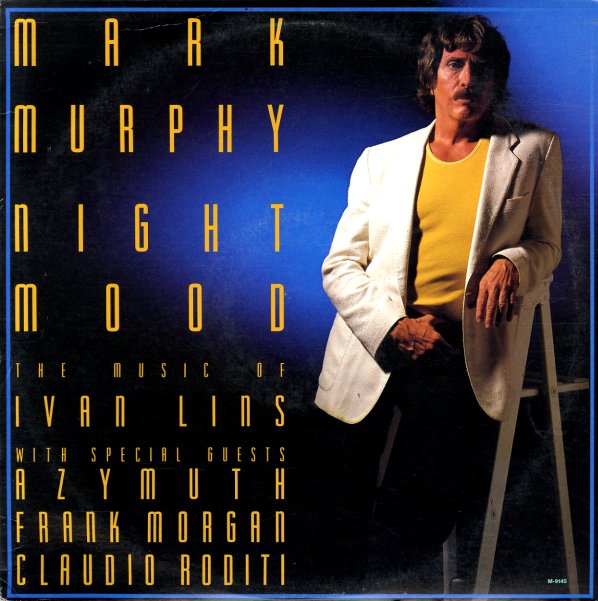 Mark Murphy sings the music of Ivan Lins – a great mix of modes, with instrumentation from Azymuth, and work from Frank Morgan on alto and Claudio Roditi on trumpet!  © 1996-2022, Dusty Groove, Inc.
(Cover is lightly stained and wavy at the top, with some surface wear and a cutout notch.)

Start Of Something
Capitol, Late 50s. Very Good
LP...$4.99
Quite possibly the greatest of Mark Murphy's early albums for Capitol – a heavily swinging set that features some great arrangements from Bill Holman, and Mark's classic version of the title tune – which he'd reprise nicely in years to come! The album's got Murphy in great west coast ... LP, Vinyl record album

Rah
Riverside, 1961. Near Mint-
LP...$14.99
Great early work by Mark Murphy – a set that's different than the cool breeziness of his 70s work, and done with an approach that's a lot hipper than most of his 60s contemporaries! Ernie Wilkins handles the arrangements, and there's a rollicking soul jazz groove here that's a bit unusual ... LP, Vinyl record album

All Through The Night
Liberty, 1965. Very Good
LP...$9.99
An oft-overlooked gem from Julie London – a dreamy album of Cole Porter tunes, and one that has her singing with small group backing, very much in the mode of some of her best early work for the Liberty label! The group on the album's the Bud Shank Quintet – with Shank on alto and ... LP, Vinyl record album

Get Happy
Columbia, Early 70s. Near Mint- Gatefold
LP...$6.99
A great overlooked set from Tony Bennett – one of the many great albums he did for Columbia over the years! Backings are by the London Philharmonic, whose shimmering sounds really work magic for Bennett's vocals! LP, Vinyl record album

Belafonte At Carnegie Hall – The Complete Concert
RCA, 1959. Near Mint- 2LP Gatefold
LP...$19.99
A very well-recorded live set – one in which Harry Belafonte's voice echoes out beautifully in the space of Carnegie Hall, alongside hip backings from Robert Corman! LP, Vinyl record album