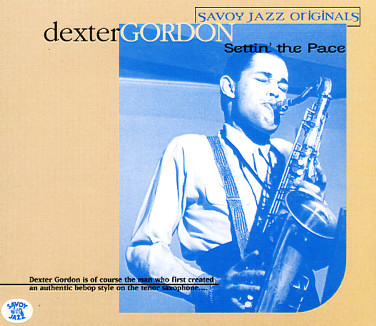 The near complete studio recordings done by Dexter Gordon as a leader for Savoy in the mid 40s – key 78rpm recordings that helped redefine the sound of the tenor in jazz! The material here is all strongly boppish – and presented with alternate takes on a number of the sessions, making for a whopping 23 tracks that cover most of Dexter's master takes and a good number of unissued alternates! First up are 4 tracks with a 1945 quartet that includes Sadik Hakim on piano – followed by 8 more from a 1946 session with Bud Powell on piano, Max Roach on drums, and Leonard Hawkins on trumpet. These are followed by 3 great tracks from Gordon's 1947 session with Leo Parker on baritone and Tadd Dameron on piano – which roll into the last 8 tracks, all from a 1947 session that includes Fats Navarro on trumpet and Dameron again on piano. Titles include "So Easy", "Dexter's Riff", "Dexter's Deck", "Blow Mr Dexter", "Dexter's Minor Mad", "Dexter Digs In", "Dexter Rides Again", "Long Tall Dexter", and "Index".  © 1996-2023, Dusty Groove, Inc.
(Out of print)