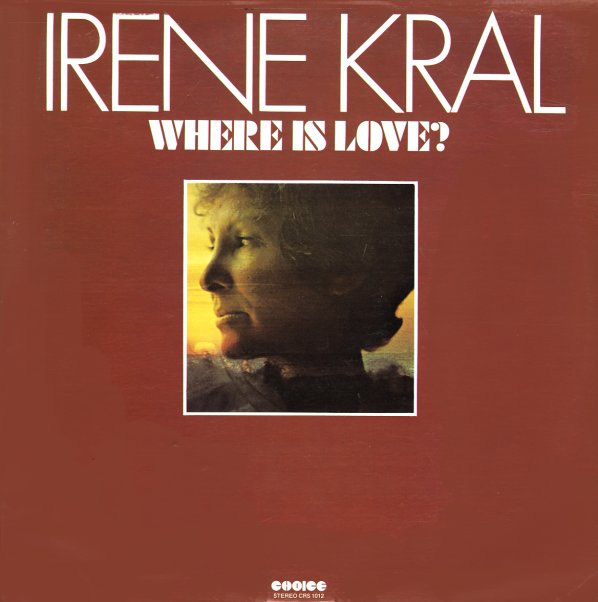 Mid 70s magic from vocalist Irene Kral – one of a handful of albums that really had Kral setting herself apart from most other jazz vocal contemporaries! The approach here is very simple – just Irene's voice and piano backing from Alan Broadbent – but a hell of a lot goes on in the spare space, thanks to subtly expressive vocals from Kral – never too overdone, yet filled with a mature sophistication that's wonderful – almost conversational at points, yet always with a soft swing that reminds us that she's a jazz singer at heart. Titles include "Love Came On Stealthy Fingers", "I Like You You're Nice", "When I Look In Your Eyes", "A Time For Love/Small World", "Never Let Me Go", "Lucky To Be Me/Some Other Time", "Don't Look Back", and "Spring Can Really Hang You Up The Most".  © 1996-2022, Dusty Groove, Inc.
(Cover has light wear.)

Gentle Rain
Choice, 1978. Near Mint-
LP...$4.99
Gentle Rain, and a very gentle sound from Irene Kral – a wonderfully intimate album that has the vocalist working with only the piano of Alan Broadbent for accompaniment! Kral's always a pretty expressive singer, but she sounds especially so here – really getting a lot of space to ... LP, Vinyl record album

Wonderful Life
Mainstream, Mid 60s. Near Mint-
LP...$9.99
One of the more obscure 60s albums cut by jazz vocalist Irene Kral – and a great little record that shows her to be more of a singer than we expected! Some of the tunes on the set have the straight vocals with band feel of Irene's other albums, but a few more go for a groovier sort of 60s ... LP, Vinyl record album

Sermonette
Riverside, 1961. Very Good
LP...$4.99
Vocalist Billie Poole was an obscure one. She only cut one or two albums in the early 60s, but they're pretty nice ones that mix jazz vocalizing with lots of nice gospelly tinges, in a way that would show up later in the 60s in other singers' work. This hard to find album for Riverside features ... LP, Vinyl record album

Chris Connor
Atlantic, 1956. Very Good+
LP...$16.99
The first album in a legendary run of vocal jazz classics on Atlantic Records – and a set that really helped Chris Connor move to a new level of expression in her music! The sound here is much richer than Connor's previous recordings for Bethlehem – and the small combo jazz backings ... LP, Vinyl record album

I've Been There
Audio Fidelity, 1965. Very Good
LP...$9.99
A rare set from vocalist Jane Harvey – a singer who managed to cut a handful of wonderful sides over the course of a few decades – none of them hits, but all of them great! This mid 60s session was cut in England with some mature backings from Ray Ellis – arrangements that are ... LP, Vinyl record album

American Poets Songbook
Blues Blood, 1975. Near Mint-
LP...$13.99
A record that's very different than you might expect from the cover – as Jim Bartow is more of a folk soul singer, with a very unusual range – working alongside his own guitar, but getting help from jazz musicians at times, including Vic Dickenson and Bennie Morton on trombone, and Doc ... LP, Vinyl record album

Leon Thomas In Berlin
Flying Dutchman, 1971. Good Gatefold
LP...$3.99
A wonderful live performance by vocalist Leon Thomas – and a set that seems to link together both his own excellent solo material of the time, and his key Impulse recordings with Pharoah Sanders! The group here is a small one – with the wonderful Oliver Nelson on alto sax, showing off ... LP, Vinyl record album

Lonely Girl
Liberty, 1956. Very Good
LP...$9.99
Looking like she does on the cover, it's hard to imagine Julie London being a lonely girl – as she's very seductively posed, with that slinky bare shoulders look that no doubt helped many of her early Liberty sides sell so well! But apart from the cheesecake, the record's one of Julie's ... LP, Vinyl record album