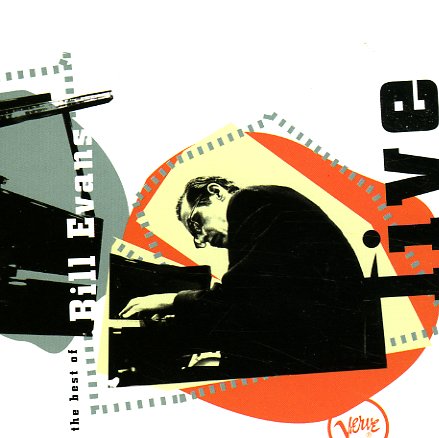 Alone (Japanese paper sleeve edition)
Verve (Japan), 1968. Used
CD...$24.99
Solo work by Bill Evans – recorded in 1968, at a time when he was increasingly exploring gentleness in his work! The album's quite haunting – done with no other musicians, no overdubs (as in other solo 60s albums) – just Evans alone at the keys, expressing himself with a somber ... CD

Everybody Digs Bill Evans (with bonus track)
Riverside/OJC, 1958. Used
CD...$5.99 (LP...$29.99)
Everybody Digs Bill Evans – or at least it certainly seems that way from the cover endorsements by Miles Davis, Cannonball Adderley, and Ahmad Jamal – but the real proof is in the record, and the set is a great one from Bill's classic years on Riverside! Evans is at the peak of his ... CD

Bill Evans Trio with Symphony Orchestra
Verve (Germany), 1966. Used
CD...$5.99
Tremendous work from Bill Evans – one of his rare non-trio sides of the 60s – and a stunning batch of tunes with backings from the mighty Claus Ogerman! Most of the tunes here are of classical origin, but they're recast by Evans and Ogerman with almost a soundtrack sensitivity – ... CD

At The Village Vanguard
Riverside, 1961. Used
CD...$3.99
One of Bill Evans' landmark sessions with the young bassist Scott LaFaro – a player who made key contributions on every record he touched, then left this earth far too soon in his career! The live session's a perfect demonstration of the way that the Evans trio format not only re-worked the ... CD

Tequila (with bonus tracks)
Verve, 1966. Used
CD...$11.99
A classic from Wes Montgomery – and exactly the kind of record that made him a legend in the 60s! The set's one of Wes' collaborations with arranger Claus Ogerman – a key talent who was really on the rise at the time, and who understood how to perfectly balance Montgomery's unique ... CD

Ben Webster & Associates (Verve master edition)
Verve, 1959. Used
CD...$8.99 (CD...$4.99)
Classic late Webster material, recorded in a laidback setting for Verve, with associates that include Coleman Hawkins, Budd Johnson, Roy Eldridge, Jimmy Jones, and Les Spann. Side one is a very long version of "In A Mellow Tone", with a blowing session solo approach – and side two ... CD