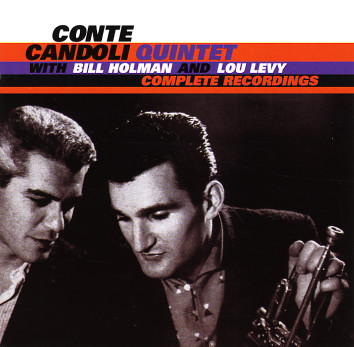 A great document of a great little group – the 1955 quintet of trumpeter Conte Candoli – noteworthy not only for Conte's own trumpet work, but also for the presence of tenorist Bill Holman! The first half of the CD features the album Powerhouse Trumpet – originally cut for Bethlehem Records, and featuring a bit more solo space than Conte got on other sessions – really drawing focus on his tremendous tone, a sound that was tight and confident, yet never too slick or brassy. Holman's horn is always a treat in a record like this – slightly sharp on the edge, with a tone that's surprisingly soulful at times. Other players include Lou Levy on piano, Larry Marable on drums, and Leroy Vinnegar on bass – and titles include "Toots Sweet", "Full Count", "Four", "Groovin Higher", and "Jazz City Blues". The second half of the CD features the album West Coast Wailers – cut less than a month after the first one, and with the same group – all in a sound that really preserves the same sort of energy! As before, Candoli and Holman provide some wonderful moments – and Levy's piano seems to get even more place in the arrangements than before. Titles include "Lover Man", "Pete's Alibi", "Cheremoya", "Jordu", "Marcia Lee", and "Flamingo".  © 1996-2022, Dusty Groove, Inc.
(Please note the tray card is wavy, has some glue on the inside, a bit of clear tape, and is missing one spine – priced accordingly.)