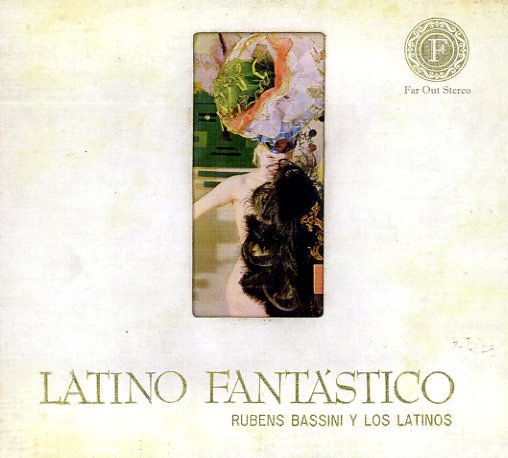 Also available
Rubens Bassini — Latino Fantastico ... CD 8.99
The rare Latino Fantastico from Rubens Bassini – featuring a range of percussion and overall vibe that blends the feverishly rhythmic vibes his native Brazil with African, Cuban and South American styled numbers with ultra groovy exotica! Bassini is a master percussionist and he's backed by a stellar roster of Rio players from the time – bringing both a creative spirit and skilled instrumentation that keeps it well out of cocktail kitsch territory, but that said, it's well infused with a playful sense of fun – and we're glad to see and hear it after all these years! 19 mostly short numbers, including "Afro Cubano (Canto Karabali)", "Mambo", "Maracas (Surda)", "Merengue", "Guiro", "Bongo", "Tumbadoras", "Timbales", Bembe", "Samba (Samba No Congo)", "Tumbadoras", "Guaguanco", "Quinto" and more.  © 1996-2022, Dusty Groove, Inc.

Ritmo Fantastico
Pawal/Ultra Vybe (Japan), 1961. Used
CD...$14.99
Fantastic rhythms from percussionist Rubens Bassini – a set that has all the raw live energy of a Latin jazz jam session, but which also carries some of the sweet touches of the bossa nova scene in Brazil – a really wonderful mixing of modes that makes the album a gem all the way ... CD

Brazilian Love Affair 4 – The Essence Of Brazilian Chill Out
Far Out (UK), 2003. Used
CD...$4.99
A great set that's way way more than the "chill out" promised in the title – a collection of Brazilian groovers pulled from some of the best labels in the business! As with previous volumes in this series, the focus is on work done for the groundbreaking Far Out label – but ... CD

Return Of Os Ipanemas
Far Out (UK), 2001. Used
CD...$6.99
It's been a long time coming for the "return" of these guys – nearly 40 years – but it's been well worth the wait! This excellent batch of bossa jazz tracks picks up directly where the group left off back in the 60s – swinging nicely in a complicated mode that's light ... CD

Nova Bossa Nova
Natasha Imports/Far Out (Brazil), 1998. Used
CD...$4.99 6.99
The first album by Marcos Valle after years and years away from the studio – a set that really reintroduced his talents to a whole new generation! The set was recorded for the Far Out label in London – a then-new imprint who were doing a great job to bring back a Brazilian groove that ... CD