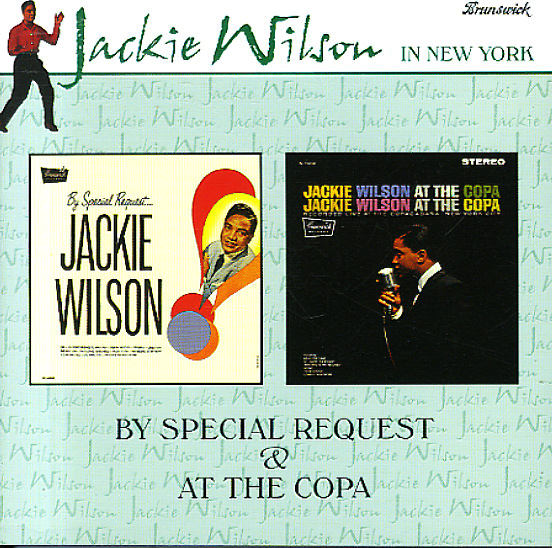 By Special Request/At The Copa

2 of Jackie's more unusual albums for Brunswick – both from the early New York years, back to back on one CD. By Special Request features Jackie running through a set of mostly standards – doing them in a jazzier style than usual, but all with the soulful vocals that you'd expect. Titles include "Tenderly", "Mood Indigo", "One More Time", "I'm Comin On Back To You", "Lonely Life", "The Way I Am", and "Try A Little Tenderness", done as a soul tune years before Otis Redding's version! At The Copa is one of Jackie Wilson's more supper clubby recordings, with a lot of show stuff and standards, and a few medleys of tracks. Still, it's nice to hear him live, and although he's not shouting, he's still pretty soulful, or about as soulful as Sam Cooke was at the Copa. Titles include "A Perfect Day", "Love For Sale", "The Way I Am", and "I Love Them All".  © 1996-2022, Dusty Groove, Inc.
(Out of print.)

Energy To Burn/1980
Roadshow/Edsel (UK), 1976/1980. Used
CD...$18.99
2 stunners from BT Express – the group's 3rd and 6th albums – back to back on one CD! Energy To Burn is a killer set that's extremely well-titled – as BT Express were one of the hottest ensemble funk acts of their time! The groove here is definitely aimed at a more disco-oriented ... CD