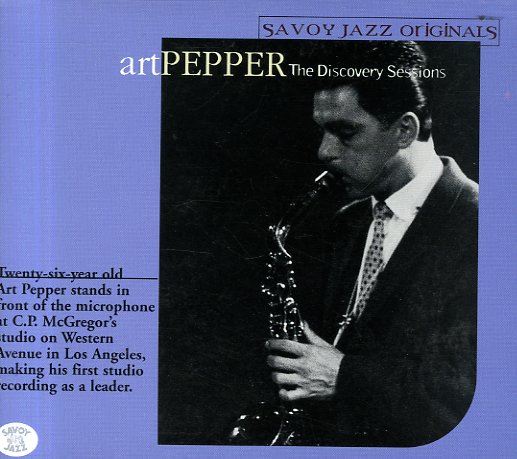 Some of the best Art Pepper work you'll ever find! The CD is filled with tracks that were originally cut for Savoy Records during the time of Art's Surf Ride album for that label – some of which were included on the album, others of which are equally wonderful, but which were lost on the cutting room floor for years. Pepper's tone is fantastic – with more of an edge than usual, kind of a raspy soulful quality that you don't find in some of his other work, especially those slicker overrated sessions that most consider "classic". We love this material, and this CD is the first time the work's been adequately compiled on disc. There's a number of alternate takes, but don't worry, because they're worth hearing, and often have very different solos. Titles include "Brown Gold", "Surf Ride", "Chili Pepper", "Nutmeg", "Suzy The Poodle", "Thyme Time", "Straight Life", and "Art's Oregano". 22 cuts in all!  © 1996-2022, Dusty Groove, Inc.
(Out of print. Disc is great but cover has signifcant wear.)

Art Pepper Meets The Rhythm Section
Contemporary/OJC, 1957. Used
CD...$6.99 (CD...$11.99)
One of Art Pepper's classic recordings, in which he plays with a spare quartet backing by Miles Davis' rhythm section at the time – Paul Chambers, Red Garland, and Philly Joe Jones. An essential East meets West jazz recording, with Art at the top of his game, playing in a unique setting for ... CD

Art Pepper Meets The Rhythm Section
Contemporary (Japan), 1957. Used
CD...$11.99 (CD...$6.99)
One of Art Pepper's classic recordings, in which he plays with a spare quartet backing by Miles Davis' rhythm section at the time – Paul Chambers, Red Garland, and Philly Joe Jones. An essential "east meets west" jazz recording, with Art at the top of his game, playing in a unique ... CD