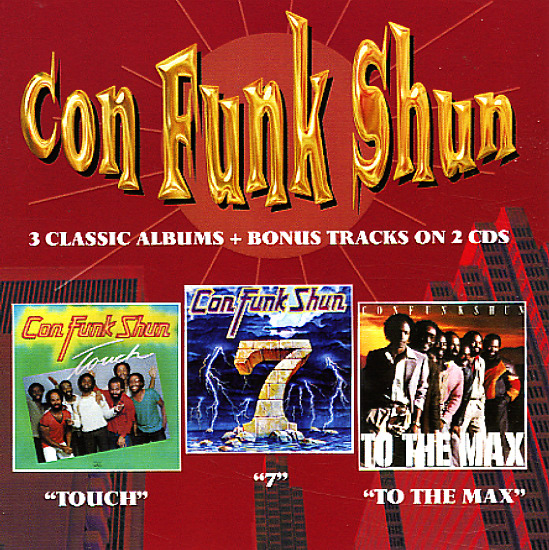 A trio of early 80s efforts from Con Funk Shun in a 2CD set – with bonus tracks! Touch is a killer from the group – one of the few mainstream funk groups who actually managed to sound better and better with each new record – and on this set, they really seem to come into their own! Titles include "Too Tight", "Lady's Wild", "Give Your Love To Me", "Kidnapped", "Welcome Back To Love", "Touch", and "Play Widit". Includes 2 bonus tracks: "Lady's Wild (12" Version)" and "Body Lovers (12" Version)". 7 is not the group's 7th album, but a bold statement of the unity they feel as a 7 piece ensemble – perfectly lived up to in the record's well-crafted grooves! The album's one of Con Funk Shun's best overall – really solid, but never too slick, very tight in the bass department, but still soulful on the vocal tip, and never afraid to slip into a sweeter, more mellow tune. Titles include "Straight From The Heart", "Bad Lady", "Promise You Love", "I'll Get You Back", "A Song For You", and "California 1". To The Mix has snapping grooves and a sweet clubby sound. The bass is tight, the keyboards are electric, and the rhythms are great – never forced or stiff, and always flowing with a sense of soul that's head and shoulders above most of the group's contemporaries. Vocals are strong too – especially on the numbers that step things down a few notches – and titles include "Ms Got The Body", "Let's Ride & Slide", "Everlove", "Hide & Freak", "You Are The One", "Take It To The Max", "The Freak", and "Love's Train". Includes the bonus "Ms Got The Body (12" Version)" and an instrumental version.  © 1996-2023, Dusty Groove, Inc.

Slave/Steve Arrington/Aurra – The Definitive Collection (3CD set)
Robinsongs (UK), Late 70s/Early 80s. New Copy 3CD
CD...$24.99 38.99
The first-ever group-spanning collection of work from the family of Slave – the late 70s funk powerhouse that was also linked to the group's Aurra and Steve Arrington's Hall Of Fame! The package is heavy on work from Slave – that bass-heavy group who really revolutionized the sound of ... CD