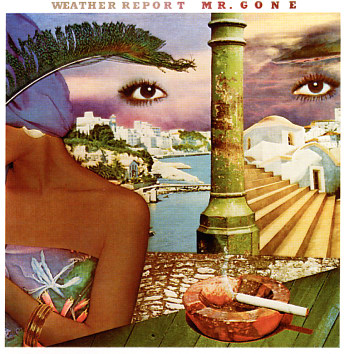 A great late 70s set from Weather Report – a record that's certainly got more polish than the early years, but which still sounds plenty darn great to our ears – thanks to a really free-flowing sense of imagination! The tunes here have a wonderfully chunky sort of approach to the groove – that kind of building, pulsating quality that always marked Weather Report as organic, even when electric – and which gave their music a sense of soul, even when it was sometimes smooth. There's enough dark corners here to shake off any of the more commercial touches – and it's wonderful to hear the way that Wayne Shorter and Joe Zawinul have evolved the original Weather Report ethos into something new and fresh. Titles include "Punk Jazz", "Mr Gone", "The Elders", "Young & Fine", "River People", and "The Pursuit Of The Woman With The Feathered Hat".  © 1996-2021, Dusty Groove, Inc.
(Includes the printed inner sleeve.)

Romantic Warrior
Columbia, 1976. Near Mint-
LP...$6.99 (CD...$5.99)
One of the hardest-jamming Return To Forever albums – recorded with the post-Brazilian lineup that includes Chick Corea on keyboards, Stanley Clarke on bass, Lenny White on percussion, and Al DiMeola on guitars. Corea's very firmly in the lead – stretching out in heavy keyboard romps ... LP, Vinyl record album