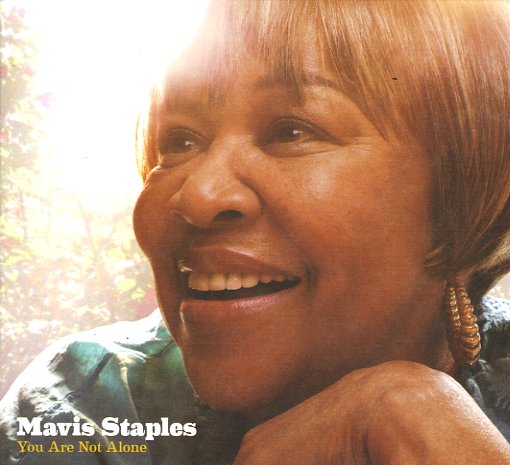 You Are Not Alone

A rawly beautiful set from Mavis Staples – produced by Jeff Tweedy, and we think it's her best of the past decade! There's a roomy, lived in vibe that's achingly effective on this one – the core group is her road band, with additional players including Tweedy, Patrick Sansone, Mark Greenberg, Richard Parenti, and the angelic backing vocals of Kelly Hogan and Nora O'Connor. Includes a pair of new originals written for Mavis by Jeff Tweedy – the soulful and spirited "You Are Not Alone" and the sly, swaggery "Only The Lord Knows" – plus roosty soul reworkings of traditionals "In Christ There Is No East Or West", "Creep Along Moses" and "Wonderful Savoir", the Roebuck Staples gems "Don't Knock" and "Downward Road, Allen Toussaint's "Last Train", the Rev. Gary Davis penned "I Belong To The Band" and more.  © 1996-2023, Dusty Groove, Inc.

Frankie & The Fashions, Others

Philly Legends – Tribute Album
49th St, 1960s/1999. Used
CD...$6.99
A late Philly tribute album put together by Frank Lafaro of Frankie & The Fashions. Most of the tracks here are by a modern version of that group, with a handful songs by Len Barry, The Tymes, and Anthony Maresco – but there are also a few early 60s practice tapes from other Frank Lafaro ... CD

My Life
Uptown/MCA, 1994. Used
CD...$1.99
The stunning second album from Mary J Blige – a record that showed that both the singer and her new form of soul music were around to stay! Production is from Sean Combs and Chucky Thompson – very heavy on beats borrowed from the underground, but nicely tuned to the mainstream – ... CD

My Life
Uptown/MCA, 1994. Used
CD...$1.99
The stunning second album from Mary J Blige – a record that showed that both the singer and her new form of soul music were around to stay! Production is from Sean Combs and Chucky Thompson – very heavy on beats borrowed from the underground, but nicely tuned to the mainstream – ... CD

Doo Wop Box – 101 Vocal Group Gems From The Golden Age Of Rock 'N' Roll (4CD box set)
Rhino, Late 40s/1950s. Used 4 CDs
CD...$19.99
Music from the Orioles, the Ravens, the Crows, the Velvets, the Teenagers, the Clovers, the Willows, the Dells, the Pastels, the Monotones, the Shields, the Crests, the Elegants, the Bosstones, the Passions, the Edsels, the Regents, the Halos, and more – 101 tracks in all! CD

All Day Music
United Artists, 1971. Used
CD...$14.99 (LP...$7.99)
A sweet sweet set from the mighty War – and maybe the record that really has the group coming into their own! The record's got a stronger vocal presence than earlier War efforts, which is a really great thing – kind of a blend of sweet soul, heavy funk, and Chicano modes – all ... CD