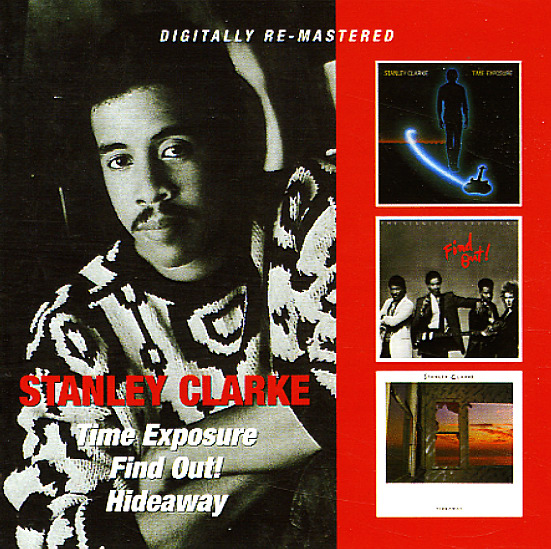 A trio of funky electric albums from Stanley Clarke's mid 80s R&B years – 1984's Time Exposure, ''85's Find Out and '86's Hideaway – in a 2CD set! Time Exposure has a lot of 80s electro funk in the mix, particularly Clarke's impeccable bass lines, which are heavy throughout. Titles include "Play The Bass '10", "Heaven Sent You", "Speedball", "Future Shock" and the great title track. Find Out follows somewhat similar territory, an 80s synth funky set with a few surprising twists – including an electro/funk/old school rap cover of "Born In The USA"! Other tracks include "Find Out", "The Sky's The Limit", "Stereotypica" and "Psychedelic". Hideaway makes a move towards more delicate synth soul for Clarke – who assembles an impressive guest list that includes Stanley Jordan, Herbie Hancock and Stewart Copeland. Titles include a cover of Stevie Wonder's "Overjoyed", plus "My Love, Her Inspiration", "Where Do We Go", "Old Friends" and "When It's Cold Outside".  © 1996-2021, Dusty Groove, Inc.