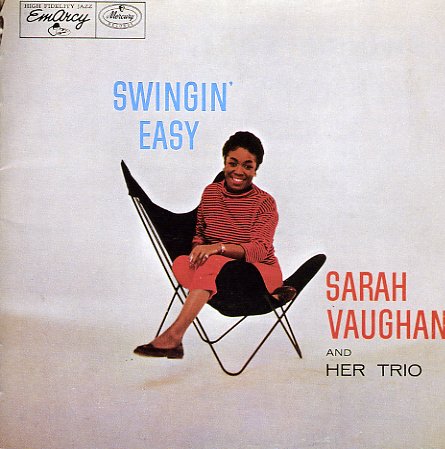 Very nice jazz-oriented material that has Sarah working with Jimmy Jones, one of her best accompanists, or John Malachi, who was in Billy Eckstine's band at the same time Sarah was with the group. All the tracks have nice small combo instrumentation – and Sarah keeps things nice and warm vocally, free to get a bit more intimate than usual in the album's casual setting. Titles include "All Of Me", "Lover Man", "Polka Dots & Moonbeams", "Prelude To A Kiss", and "You Hit The Spot".  © 1996-2021, Dusty Groove, Inc.
(Out of print.)

It's A Man's World
Mercury (Japan), 1967. Used
CD...$9.99
A pretty obscure Sarah Vaughn album – and a nice one! The album's got Sarah singing with arrangements by Hal Mooney, who'd done work for her before in a more standard way, and who here is opening up a bit, at times almost hitting a groovy late 60s mode. Players in the group include Bob ... CD

Dinah Jams
EmArcy/Phonogram, 1954. Used
CD...$4.99
One of the best jazz-based sessions recorded by Dinah Washington in the 50s – appropriately titled Dinah Jams, which is a pretty good reference to the feeling of the set! The sessions were recorded in a relatively relaxed, intimate feel – not necessarily as unbridled as a true jam ... CD