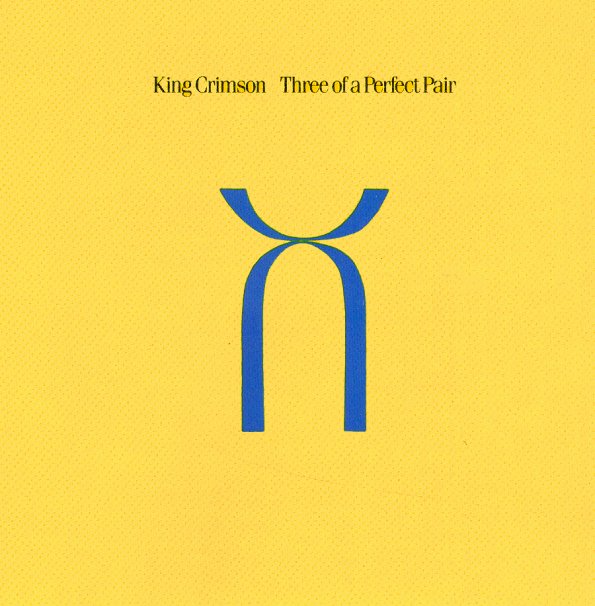 Three Of A Perfect Pair

The last of the "revival" King Crimson from the early 80s – featuring the lineup that included Robert Fripp, Adrian Belew, Bill Bruford, and Tony Levin. The style is fairly academic, but Belew's presence still gives the record a bit of heart – something that Fripp had trouble doing on his own, even after all these years. Titles include "Dig Me", "Industry", "Lark's Tongue In Aspic Part 3", "Three Of a Perfect Pair", and "Sleepless".  © 1996-2022, Dusty Groove, Inc.
(Includes the printed inner sleeve.)

Islands
Island (UK), 1972. Near Mint-
LP...$43.99
One of our favorites by King Crimson – and a record with a lot more jazz than some of their others! Players include Mel Collins on lots of flutes and saxes – plus guests Keith Tippett on piano, Mark Charig on cornet, and Harry Miller on bass! LP, Vinyl record album

Larks' Tongues In Aspic
Atlantic, 1974. Very Good
LP...$14.99
For some folks, this might be the purest moment of sonic genius from King Crimson – a record that has this incredible dynamic range, with ultra-low passages followed by soaring highs – all delivered by a group that might well be one of the most technically skilled that Robert Fripp had ... LP, Vinyl record album

Last Record Album
Warner, 1975. Very Good
LP...$7.99
Of course, this is not the last record album – it's not even the last album by Little Feat – but it's a damn good one! The Last Record Album isn't restless as the previous few albums, with kind of a laidback groove, overall – and we actually really dig Little Feat in a mellow ... LP, Vinyl record album

Crab Tunes/Noggins
Warner, 1971. Very Good+
LP...$13.99
A really cool record, one that's filled with all sorts of unusual instrumental moments! The record is a side project from the Youngbloods side of the universe, issue don their Raccoon label – but it's got no vocals, and instead features guitar and piano from the enigmatic Banana – plus ... LP, Vinyl record album