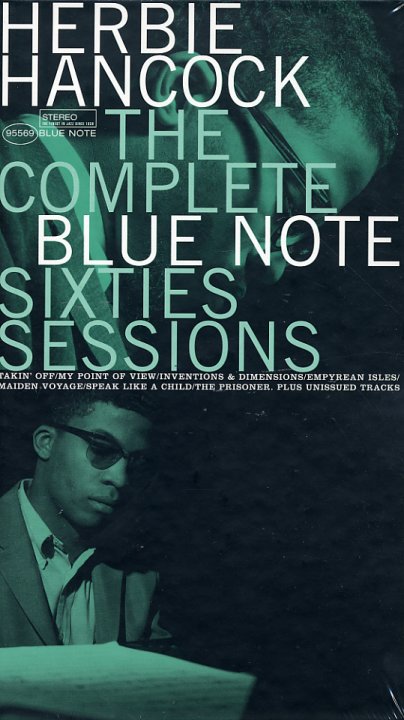 All of Herbie Hancock's classic 60s recordings for Blue Note – packaged in one whopping set, along with a pretty fair number of previously unreleased takes! The 6CD set features 54 tracks in all – and is beautifully packaged in a book-like format that folds out nicely, and which also contains a good booklet with writings on the music, and full discographical notes! The set features all the material from the albums Takin Off, My Point Of View, Inventions & Dimensions, Empyrean Isles, Maiden Voyage, Speak Like A Child, and The Prisoner – plus the unissued tracks!  © 1996-2022, Dusty Groove, Inc.
(Out of print and in great shape!)

Quartet
CBS, 1982. Used
CD...$8.99
Acoustic magic from Herbie Hancock – proof that he wasn't only cutting electro records in the 80s! The set's got a fluid, open feel that's a bit like some of the VSOP Quintet work – although the group here is slightly different, with Hancock on acoustic piano, Ron Carter on bass, and ... CD

Empyrean Isles
Blue Note, 1964. Used
CD...$4.99
A lyrical masterpiece from the young Herbie Hancock – and a record that's really special for so many different reasons! First, the songs are really long and open – even more so than some of Hancock's other work – with a quality that's balanced between his soul jazz roots, and ... CD

Headhunters
Columbia, 1974. Used
CD...$4.99 (LP...$79.99)
A seminal jazz funk session of the 70s – Herbie Hancock's legendary meeting with The Headhunters, and a killer batch of tunes that really gave the combo their name! Herbie's playing a wide range of keys here – including Fender Rhodes, clavinet, and Arp – but almost even better is ... CD